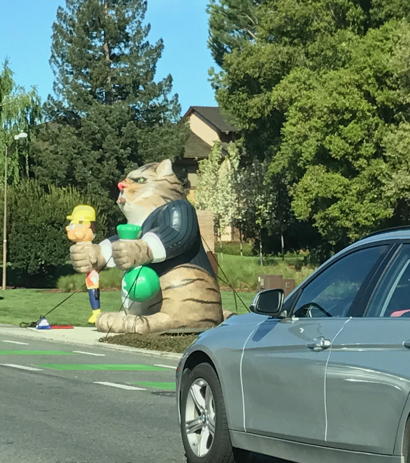 The giant inflatable cat on Sand Hill Road about half way between Santa Cruz and 280 is impossible to miss.

Truth be told me initially thought it was some kind of hopping Easter cat (or at first glance a squirrel) until we noticed two men holding up a sign protesting Precision Tile and Granite, a Brisbane-based company. Their beef, according to the signage, unfair wages.

We asked the company for comment, and got this response from Marcel Sousa:

“What you saw today is the ugly part of the Union (BAC Local 3) business model to bad mouth the competition and try to recruit workers. The ‘wage theft’ claim is completely false and baseless due to the fact we pay our workers very competitively and often higher wages than the Union. I have many long-term staff members that continue to work for Precision Tile & Granite for many reasons including fair treatment, higher wages and stable work.

“Unfortunately, the protest you saw is part of the ongoing harassment by the Union to my company and employees.”
Photo by Linda Hubbard (c) 2017