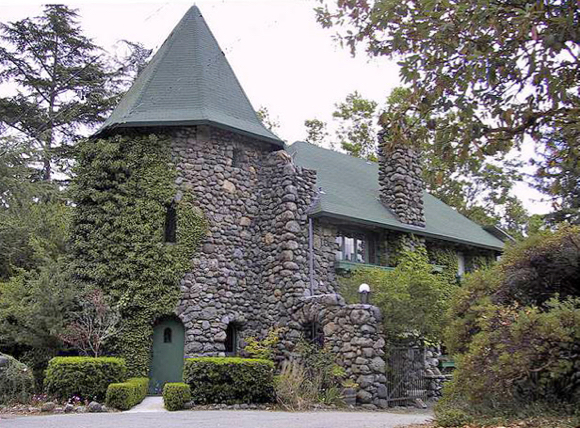 Some of the most intriguing buildings in Portola Valley are the quaint stone houses at 451 Portola that look like castles from a Grimm Brothers story. Was that window in the tower the one where Rapunzel stood and hung down her hair for the prince?  Was it the castle where Cinderella, dressed in her finery, went to the ball? Or maybe it was the house to which the evil witch enticed Hansel and Gretel. Although the property’s story is less romantic than a fairy tale, it’s nonetheless interesting.

This charming ivy-covered house is often called the Willowbrook Gate House, or just the gate house. Actually it was built around 1915 as a home for the superintendent of Willowbrook Farm, a man named Henry Schoellhamer, nicknamed “Shell.” The smaller structure was his office. They sit at one entrance to the old Willowbrook Farm, 61 acres purchased in 1912 by Herbert E. Law. It stretched approximately between Portola and Willowbrook roads as far as Alpine Road.

Herbert Law and his brother Hartland were publishers, chemists, patent medicine purveyors and land developers. They owned the unfinished Fairmont Hotel when it burned in 1906. Afterward, they hired Julia Morgan to direct the reconstruction. They were instrumental in bringing the Panama Pacific Exposition to San Francisco in 1915. In 1926, Herbert incorporated as the Lauriston Investment Company and was the main stockholder in the group that built the Sir Francis Drake Hotel.

Law purchased Willowbrook Farm from Laura Martinez Faber, granddaughter of Maximo Martinez, the original ranchero who owned the 13,000 acre Rancho el Corte de Madera. They needed a place to grow the rare herbs and plants needed for their patent medicine VIAVI, an enormously successfully product designed to cure a variety of women’s complaints. The VIAVI system included red Moroccan leather manuals and books and 10,000 active saleswomen (mostly) teaching and selling the system door to door in more than 20 countries.

Law immediately built a cow barn, stables, a bunkhouse, chicken houses, and he renovated existing gardens and orchards. In 1915, he added a white stucco villa with roof garden and tower on a knoll above the south entrance to his farm off Alpine Road. It had a loggia, red brick terraces and formal gardens with a large marble fountain, an artificial stream and waterfalls.

At one point, lathhouses for the exotic plants covered 40 acres. This farming operation required enormous quantities of water. Since Corte Madera Creek was insufficient despite providing as much as 60,000 gallons per day, Law purchased land along Spring Ridge (the long bare ridge leading to Windy Hill) and piped water as far as 3 1/2 miles to his fields. Ultimately he controlled almost 400 acres and almost all the water rights in the area.

Schoellhamer, the man who occupied the stone house, oversaw all the construction and farming. He ranged over the entire property in his khaki shirt, tie, jodhpurs, puttees, and boots. He would meet Law at the train station in Palo Alto, and they would ride their horses back to Willowbrook Farm, accompanied by two Great Danes.

Unfortunately, a blight continually affected the plants, it was hard to get skilled workers to tend them, the market for the plants weakened, and in 1920, Law traded Willowbrook Farm for the Ritz Carlton Apartments in San Francisco.

He sent Schoellhamer to the property along Spring Ridge which he had bought to supply Willowbrook and built there the enormous house called Villa Lauriston, another superintendent’s house and an “agricultural complex.” But that’s a story for another day.

In 1921, Law sold Willowbrook to William Fitzhugh of the neighboring Catoctin Estate, today’s Stonegate/Grove Drive area. The stone house was empty for a long time and a subject for vandalism. In 1941, the Catoctin people sold to a Mr. Cox, who in turn sold to Alexander and Madeleine Isenberg in 1953 for $29,000. After Madeleine Isenberg passed away, John Zicker owned the stone house for a decade. A couple of years ago, he sold to the developer who has it on the market.The next chapter of the house’s story is yet to emerge.

Although portions of the terraces exist today on private property, “Shell’s” house and office are the only remaining structures from Willowbrook Farm. The mansion was razed in 1945. The barn/dormitory at 211 Willowbrook, which had long ago been converted into a home, was demolished several years ago.

Author Nancy Lund is the Portola Valley town historian; photo courtesy of her