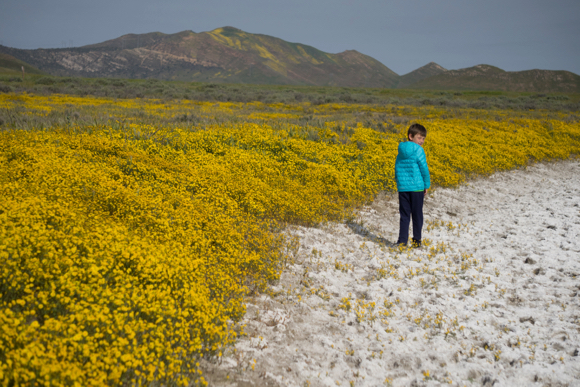 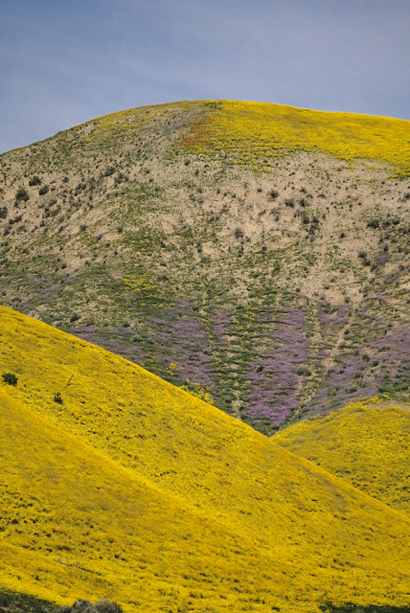 The Los Angeles Times also weighed in: “The Valley floor has endless expanses of yellows and purples from coreopsis, tidy tips and phacelia, with smaller patches of dozens of other species…Not to be outdone, the Temblor Range is painted with swaths of orange, yellow and purple like something out of a storybook.”

Breathtaking is an understatement as InMenlo contributing photographer Betsy Sergeant Snow found out this week while on a spring break road trip. “As high school teachers we often put a lot of emphasis on what it is that will provide mental restoration over spring break,” she emails.

“With this year’s impending super bloom it seemed the perfect opportunity to get out and see something close to home. With my in-laws living in Cambria, my mother-in-law, Karen, suggested that rather than go all the way south to Antelope Valley, where I originally planned to go, that I check closer to home at Carrizo Plain. It turned out to be the perfect spot to see the golden hills and the lush green fields.

“With my seven-year-old son, Trevor in tow, we headed from Cambria over to Highway 58 and enjoyed a lovely morning of bright colors and contrasts near Soda Lake. 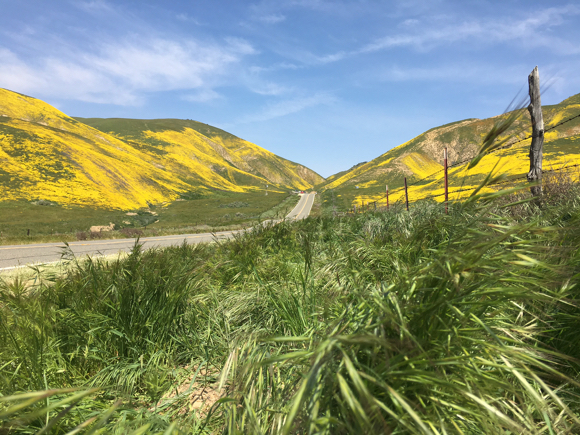 “I’m also in a time of my life when a photography trip has to be completely planned and separate from a family excursion, so this falls into the latter category. I would love to return with a full set of gear: a wide angle lens, a macro, and stay until sunset (or sunrise). In fact, the day we went happened to be a full moon, and  boy would I have loved to see that over the valley.

“Tips: head to the intersection of Seven Mile Rd. and HWY 58 for the best of the mustard bloom.”

According to the Bureau of Land Management, Carrizo Plain “is one of the best kept secrets in California…This remote monument, traversed by the San Andreas Fault which has carved valleys, created and moved mountains, and yet up close, is seen in subtle alignment of ridges, ravines and normally dry ponds. Prominent features on the monument include the white alkali flats of Soda Lake, Painted Rock, vast open grasslands, and a broad plain rimmed by mountains. When conditions are right, numerous wildflowers can carpet the valley floor; although short lived it can be breathtaking.”

We present a variety of Betsy’s photos here. The photo of Trevor (top) and the bottom photo were taken with an  iPhone; the rest were shot with a Song A7ii. More photos from her visit to Carrizo can be viewed on her website. 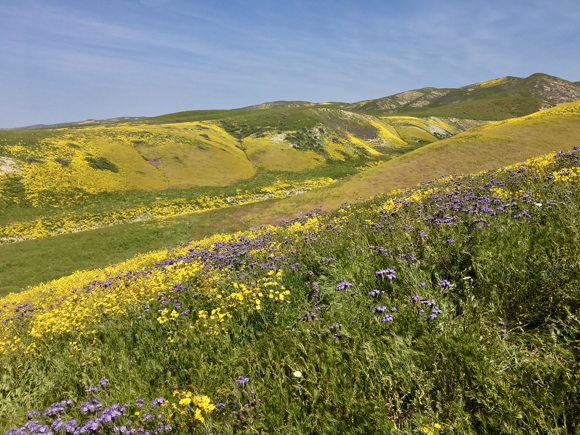