On Wednesday, April 19, the seemingly endless rain stopped and the sun came out, as if it wanted to celebrate Earth Day with students at M-A’s environmental fair.

In the center of the fair, groups played cornhole while listening to a student band perform live music. Around the perimeter, students and local businesses, such as Menlo Spark, staffed booths providing food, education and volunteer opportunities. 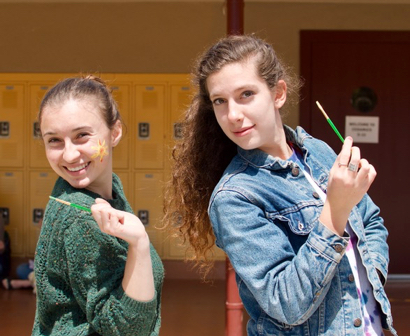 “I think people could feel a tangible buzz from the event that epitomized a village effort,” says Lance Powell, the teacher who helped organize the event. Like last year’s fair, its goal was to educate students and celebrate Earth Day.

“The fair is a great way to environmentally educate more of the M-A community, but it is also an awesome opportunity for [AP Environmental Science] students to take their learning a step further,” explains senior Joanna Vollrath. At her booth, students could eat s’mores made in a solar oven.

Some of the other booths offered face painting, provided materials to decorate reusable shopping bags, and sold vegan snacks to promote veganism and raise money for environmental causes.

Senior Caraline Albro expressed mixed feelings about all the “booths selling vegan and vegetarian food.” She explains, “[It] is a great cause, but I also think students need to focus on basic sustainability first, such as recycling. A lot of M-A students don’t even recycle, so let’s get that done first.”

Regarding the fair, Powell adds, “I thought the fair was a tremendous success and was left inspired by the M-A community.”