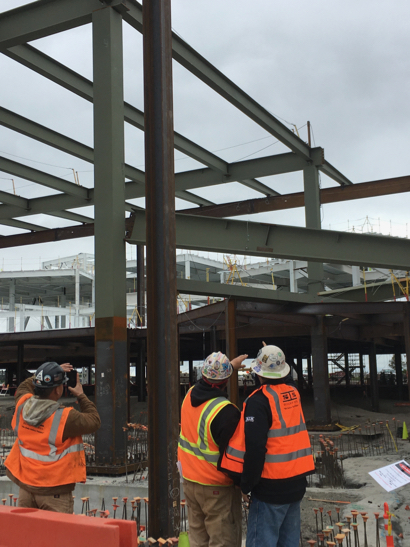 Both workers were wearing required fall protection equipment, according to a statement issued by Level 10 Construction, the contractor doing the building.

The crew of Menlo Engine 77, out of Belle Haven, arrived at 5.28 pm and was immediately escorted in by security and construction workers directly to the two injured men, who had been moved to a position of safety by fellow co-workers.

“Fortunately, the iron workers were wearing their safety harnesses and rigging, which probably helped save their lives along with, as we understand it, the fact that the beam they were attached to caught on a lower floor assembly,” said Menlo Fire Chief Harold Schapelhouman.

One of the injured workers was released from the hospital last night, and the other is still under observation, according to Level 10.  The cause of the incident is under investigation.

Menlo Fire reported that a number of steel upright and cross beams were damaged in the collapse. “Nothing can be touched until CAL-OSHA conducts an investigation,” said Chief Schapelhouman. “We will obviously support the contractor and OSHA investigators in anyway necessary.”