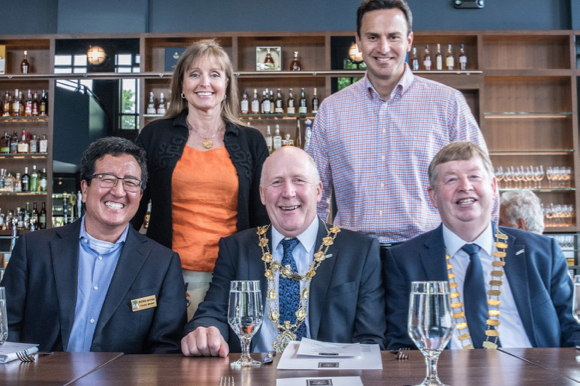 The agreement highlighted the historical bond shared between these two cities going back over 150 years ago when two Galway men, Dennis J. Oliver and Daniel C. McGlynn, from the village of Menlo near Galway, traveled to California and purchased a ranch they called Menlo Park. 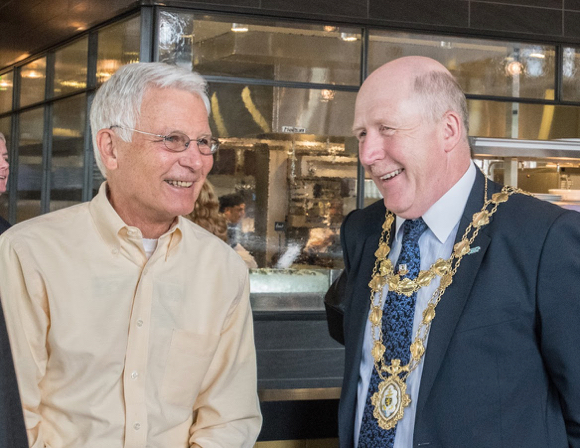 This Sister City agreement allows for further development of historical, heritage, educational and economic links between the two cities.

“I’m glad to have initiated the Sister City relationship with Galway in 2013 that continues today with an annual visit by Galway’s Mayor to Menlo Park,” said Peter. “We are learning from each other.”

The Mayors along with City Council members Catherine Carlton and Ray Mueller lunched at the British Banker’s Club.

Also on hand was Menlo Park Historical Association past president Jym Clendenin (pictured with Mayor Larkin). Jym is heading an effort to raise funds to build a replica of the Menlo Gates that once stood on El Camino Real. You can read more about the project on the MPHA’s website.

To learn more about Menlo Park’s history, consider going on a tour of Holy Cross Cemetery sponsored by MPHA and led by local historian Michael Svanevik on Saturday May 13.. Space is limited and reservations are necessary.