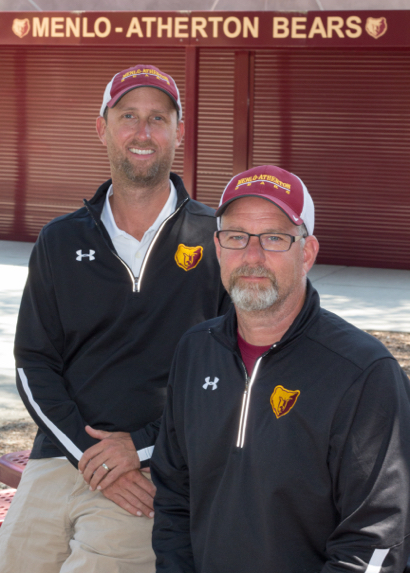 They’re in their sixth year as the school’s athletic directors and jointly oversee both girls and boys sports programs, with 1,000 students competing on 54 teams.  They agree that the success of both the boys and girls programs makes M-A athletics stand out. During their tenure, this includes 51 championships as well as winning the Peninsula Athletic League’s Commissioner’s Cup (for excellence in athletics and good sportsmanship) the last eight years in a row and nine out of the 10 years of its existence.

“We are fortunate to have great student athletes,” says Steven. “The teams’ GPAs are good and they are coachable kids.”

A second reason for the programs’ success — good coaching. “Our coaches are really qualified and are in it for the long haul,” says Paul. “They’re doing it for the love of the game and to give back to the community.”

“These are coaches who the athletes want to play for,” adds Steven. “They maximize what our athletes are capable of.”

The third success factor, both Steven and Paul agree, are the network of parents and boosters who support the program, contributing both time and money. “Most public schools don’t have the support our boosters give us,” says Steven. “They support not only the athletes but our facilities.”

Both Paul and Steven played sports through high school growing up. However, their path to M-A athletics differs. While Paul has been an educator and coach his entire professional career, Steven worked in the private sector after college and then spent some years on the Oakland police force where he was shot in the line of duty. That prompted him to return to school to get his teaching credential.

“Being an AD is a lot of work and we’re both part-time, so it’s nice to be recognized for our efforts,” says Paul about the Coaches Association honor.

At the CCA banquet in June, they’ll find out if they will be honored as state ADs of the year. The CCA is also inducting long-time M-A basketball coach Pam Wimberly into its Hall of Fame and honoring football coach Adhir Ravipati as NorCal football coach of the year.