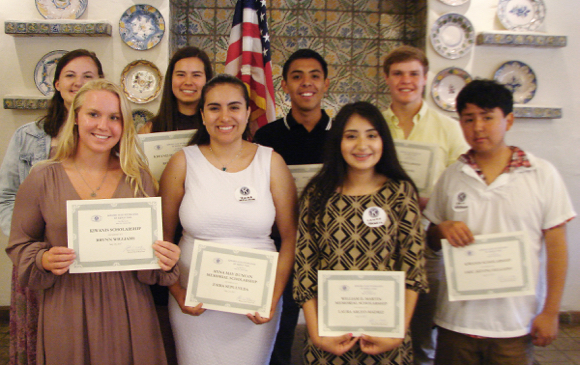 Eight outstanding Menlo-Atherton High School seniors received scholarships at the Kiwanis Club’s annual scholarship luncheon, Tuesday, May 23, at the Allied Arts Guild. This year’s scholarship awards totaled more than $55,000, up from $41,000 last year. More than $1.1 million has been awarded to local students during the lifetime of the Club’s scholarship program.

“There are many deserving students at Menlo-Atherton High School,” said John Martin, chair of the Kiwanis Club’s Scholarship Committee. “We interview the students to learn more about their academic achievements, commitments to service, and plans for college. It was obvious from their academic honors, community involvement and the broad range of interests each has, that this year’s scholarship winners are exceptional and very motivated. They will do well in college, and in life.”

Menlo Park Kiwanis Club is an active and committed partner to many non-profit organizations, having given over $100,000 last year in support of local projects. These include scholarships for Menlo-Atherton High School graduates and volunteer work with St Anthony’s Dining Room, Tour deCure of Diabetes, Special Games for physically challenged youth, Rebuilding Together and Menlo Park’s Kite Day.

The Club’s annual Christmas Tree Lot is the major source of funding for all of these philanthropic activities. Visitors are welcome to the Club’s weekly luncheon meetings, Tuesdays, 12:00-1:15 PM, at Allied Arts Guild. To reserve a spot call 650-580-4441 or contact the club.