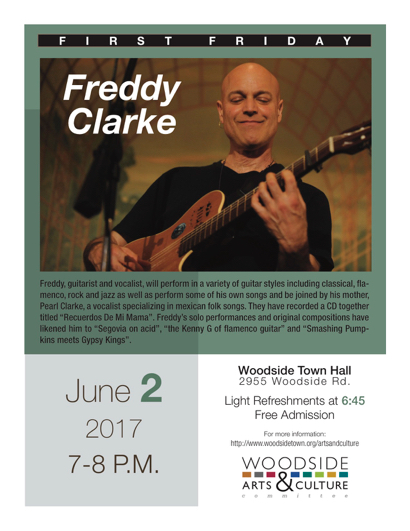 Come join the Town of Woodside’s next First Friday on June 2 as we present the inimitable Freddy Clark.

Freddy, guitarist and vocalist, will perform in a variety of guitar styles including classical, flamenco, rock and jazz as well as perform some of his own songs and be joined by his mother, Pearl Clarke, a vocalist specializing in Mexican folk songs. They have recorded a CD together titled Recuerdos De Mi Mama. Freddy’s solo performances and original compositions have likened him to “Segovia on acid”, “the Kenny G of flamenco guitar” and “Smashing Pumpkins meets Gypsy Kings”.

The event starts promptly at 7:00 pm, but arrive a bit earlier to enjoy complimentary refreshments (including wine!) and secure a seat at the Woodside Town Hall (2955 Woodside Rd.) As always, admission is free.