For the past 40 years, Menlo Park residents Timi and Robb Most have been visiting Yosemite in the spring. But this year, they report, is unlike any other due to the amount of water, not just in the form of raging waterfalls but the flooded valley floor. (And no, the top photo is not upside down! It’s a watery reflection.) 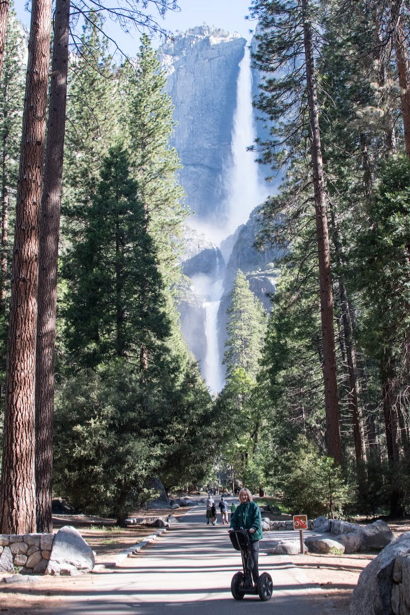 “The amount of water was astounding,” reports Timi. “An interesting fact, we were standing on a bridge with some rangers, the water was rushing below us quite close to the bridge. Meadows and trails were flooded around us.

“The rangers said by 9:00 or 10:00 pm the bridge we were standing on would be a foot underwater. Nine hours after the warmest part of the day up high in the Sierras, the melted snow hits the valley floor increasing the amount of water everywhere.”

Adds Robb: “The main thought about the water compared to another year when there was a lot of water was that there was much more water flooding the valley but less water coming off the walls. Usually there are a lot of little waterfalls pouring over the walls. Perhaps the snow near the walls had melted, and this was more from back country away from the wall.” 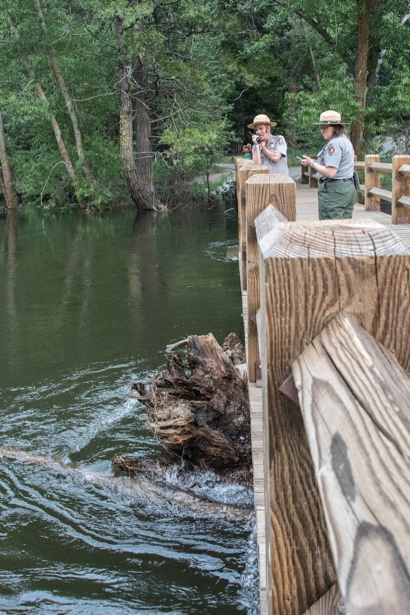 Robb captured a tree stuck in a bridge with two rangers taking notice. “It was amazing — this huge bulb of roots with the trunk swinging back and forth pointing downstream. It will be a long time before the water goes low enough to unstick the tree.”

There was a three hour traffic jam to get to Yosemite Lodge so Robb and Timi parked at the Swinging Bridge lot to walk over and come back after dinner [They are building a roundabout and Sentinal Bridge is closed]. “We tried the trail across the meadow but the meadow was flooded up to your knees. This would kill the Segway Timi uses. 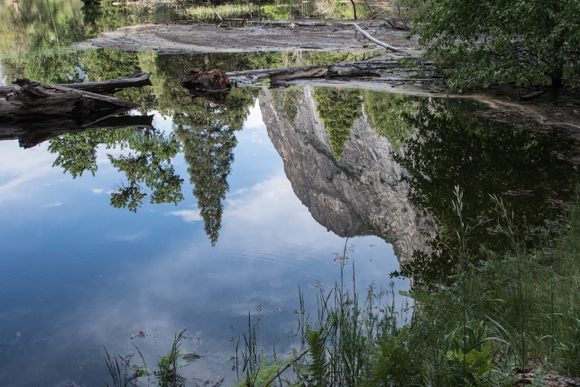 “We took another bridge further east. We talked to the ranger, and she said that about 2:00 am when the melt comes down to the valley that Swinging Bridge would be a foot under water! There was a lot of water flooding the valley. When we got back after dinner to pick up the car and drive to the Lodge, the meadow water was up to people’s chests!” 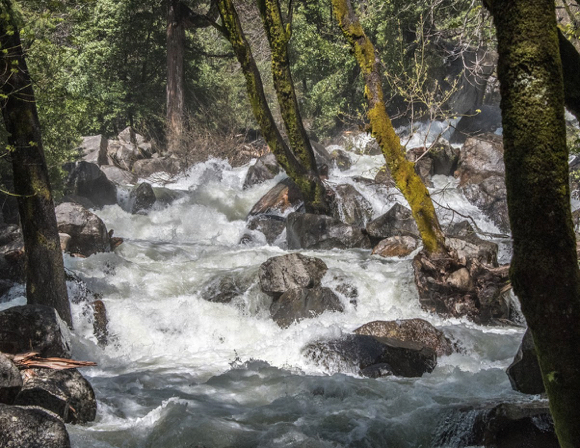 Photos by Robb Most (c) 2017. Top photo: Half Dome reflected in the water-filled meadow; upper right: Timi in front of the classic shot of upper and lower Yosemite Falls; bottom right: tree trunk stuck at a bridge; second from bottom: trees and El Capitan reflected in flooded meadow; bottom: water flowing down from Bridal Veil falls