Graduation festivities at Hillview Middle School kicked off earlier this month with the Decades Dance.  Eighth grade students are assigned to a decade and taught a dance that they perform at the end of the school year in front of family, friends and classmates.  The dance began with the roaring 20’s and this year ended with the 2000’s.

Next up was the “surprise” awards assembly. Parents were sent a “secret” invitation in advance if their student would be recognized but weren’t told what the award was for, and the kids didn’t know either. Awards ranged from departmental awards, leadership and service or “Block H” awards, faculty awards, English proficient awards, and perfect attendance awards (there were three kids who had perfect attendance through all of middle school!).

The President’s Achievement Award was earned by 116 students. This award is given to students who maintain a 3.5 GPA or higher for their entire middle school career.

Awardees also included the first graduating Spanish Immerison Group (above). These students obtained their biliteracy award through the county; this included 20 hours of community service that involved speaking Spanish, writing an essay in English and Spanish, an oral presentation and completing all nine years of Spanish study (grades K-8, Immersion and then Spanish for Spanish Speakers). Twenty-six Hillview students earned this award. 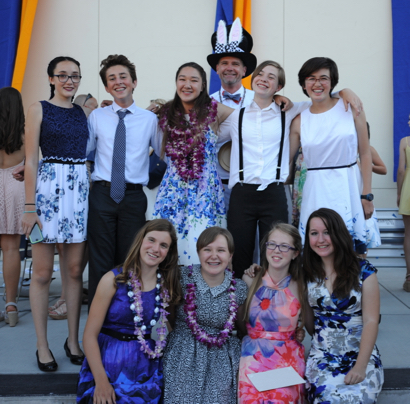 Other graduation events included a class trip to Great America on Thursday (the 15th) and the school-wide Hawkapalooza on Friday (the 16th) morning, the last day of school and graduation.

It was a hot day and parents gathered to reserve seats at 3:30 — many with golf umbrellas! The ceremony began at 5:00 with a Pomp & Circumstance processional, followed by the National Anthem, the Pledge of Allegiance and a welcome and introduction by the school principal, Willy Haug. (That’s Wally in the Mad Hatter hat with grads following the ceremony.)

Three students spoke to the graduating class  and audience, more awards were given and, then, of course, there was the presentation of diplomas before the grads were dismissed by the superintendent and students marched in procession to Legacy March. There were 308+/- graduates!

The evening closed with a grad-night to celebrate. The theme was Hillview in Wonderland. There were characters on stilts, henna and caricature/comic art, fortune telling, croquet, chess, food, and, of course dancing! At the end of the party, balloons were released from the ceiling onto the dance floor. 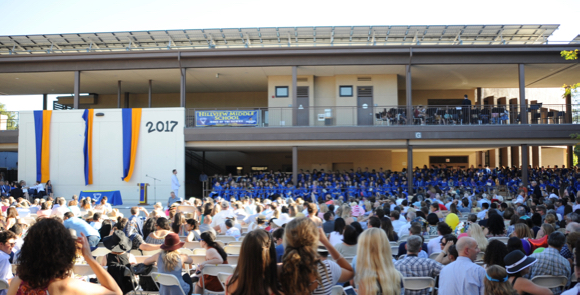