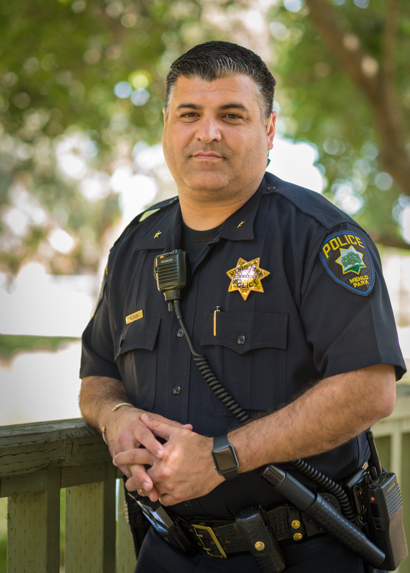 Editor’s note: As it has done in the past, InMenlo is participating in Beyond Homelessness, a special project produced by the San Francisco Chronicle, which is again spotlighting the topic in its editorial coverage this week.

At any given time, there are a dozen or so homeless people in Menlo Park. Commander William Dixon of the Menlo Park Police Department knows every one of them by name, where they hang out in the daytime, and where they sleep at night. He also works as a liaison with social services agencies such as LiveMoves and Street Life Ministries to find them appropriate services.

“The old way was taking someone to jail when there was a complaint, such as drunk in public,” he said. “That may have solved the immediate problem but it didn’t get to the root causes of why the person is homeless.’

Dixon’s innovative work with the homeless began in 2014. His police work began much earlier. He started working with the Menlo Park Police Department as an Explorer when he was 16. He’s been a police officer with the department for 20 years, and other family members are also with the MPPD.

He’s also a Menlo Park resident with kids that go to Menlo Park schools. “I’m connected to the community,” he said. “I walk around downtown and talk to merchants — and to the homeless.” 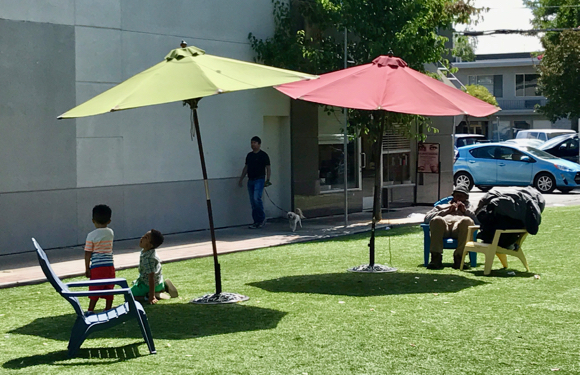 Dixon explained that Menlo has its own resident homeless along with transient homeless. “The residents have a routine, a spot they sleep in every night,” he said. “They are not criminals. The transients can prove more problematic.”

There have been various homeless encampments in Menlo Park. A year ago an encampment along the railroad tracks near Willow Road was cleared out after there had been a number of fires in the area. More recently Commander Dixon worked with an encampment near the railroad tracks and Menlo Center. “It gave us a central point to offer services — housing, medical, mental health,” said the Commander. “We found housing for eight of the ten; two are back.”

Sometimes people complain about homeless people because they smell bad. “So we are working on getting mobile shower facilities to come to Menlo Park,” Dixon said. “Sometimes we get complaints about behavior. But it’s not illegal to be disrespectful and rude.”

Because Menlo Park is a small suburban town — with a relatively small homeless population — Dixon explained the there’s more ability to follow through with any given individual. “We can find out if he or she has family and work to get them in touch and back to that family. That said, we realize that not every homeless person is receptive to help. We have a number of people here who have been homeless for years and have always refused help.”

Even with its more holistic approach, Dixon describes progress in dealing with homelessness in Menlo Park just “treading water.” “Part of my job is to keep abreast of other innovative programs and to meet people with new ideas.”

One thing both Dixon and Menlo Park Mayor Kirsten Keith agree on is the value that Menlo Park-based LifeMoves brings in dealing with chronic homelessness. “We are fortunate to have LifeMoves, which provides housing and more for homeless people to help them become self sufficient again,” said the Mayor. “Our police officers use wrap-around services to connect homeless people to these services.” She added that the City recently helped build housing on Willow Road for homeless veterans at the Veterans Administration.

Dixon also praises Street Life Ministries. “The organization is here twice a week providing meals, and also acting as advocates for the homeless, getting them medical help and making sure each individual follows through.”

What can Menlo Park residents do to help with the homeless problem? “Support those two organizations [LifeMoves and Street Life Ministries],” said Dixon. “That’s my personal opinion.”