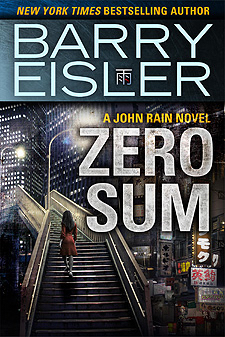 Menlo Park author Barry Eisler emailed: ” My new John Rain novel — Zero Sum — is out today! This is another prequel, again set in Tokyo ten years following the events of Graveyard of Memories:

“Returning to Tokyo in 1982 after a decade of mercenary work in the Philippines, a young John Rain learns that the killing business is now controlled by Victor, a half-Russian, half-Japanese sociopath who has ruthlessly eliminated all potential challengers. Victor gives Rain a choice: kill a government minister or die a grisly death. But the best route to the minister is through his gorgeous Italian wife, Maria, a route that puts Rain on a collision course not only with Victor but with the shadowy forces behind the Russian’s rise to dominance—and the longings of Rain’s own conflicted heart.

“It’s a battle between kingpin and newcomer, master and apprentice, a zero-sum contest that can only end with one man dead and the other the world’s foremost assassin.

“I’m already hard at work on the follow-up to Livia Lone, out in January 2018, so alas there wasn’t time to tour for Zero Sum. Just one signing—Thursday, June 29, 7:30 pm at Kepler’s in Menlo Park.”