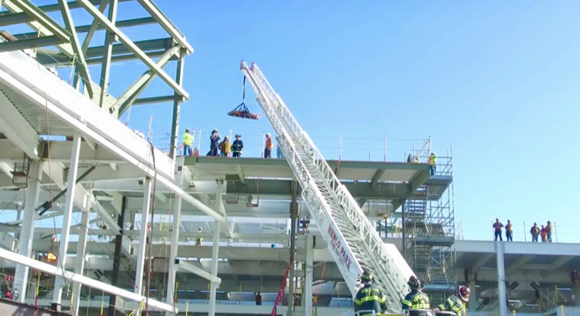 A worker fell 10 to 15 feet from the steel framing on the fourth floor/roof to the third floor yesterday morning (July 18) at the construction site of Facebook’s new Building 21. His safety harness and rigging stopped his decent prior to coming into contact with the third floor.

Fellow steel workers quickly came to his assistance, unclipping him from his safety rigging and gently laid him down on the third floor. His injuries consisted of significant pain, bruising and abrasions.

Battalion Chief Tom Calvert assembled and coordinated a total force of 10 fire personnel worked together to efficiently and safely lower the injured man down to an awaiting AMR Paramedic Ambulance that transported him to Stanford Hospital’s Trauma Center.

“Fortunately, the steel worker was wearing his safety harnesses and rigging, which probably helped to prevent significant injury or even death,” said Fire Chief Harold Schapelhouman. “This is the second time we’ve been out here in the last three months for injured steel workers falling from the building. That’s not only very unusual but it deeply concerns me.”

On April 26, 2017, two workers with Schuff Steel were working on the same building at an estimated height of 40 feet assembling the structures steel framing when a catastrophic failure occurred and the steel beam they were standing on, and attached to, dropped an estimated 20 feet catching on a lower floor assembly, catapulting them towards the ground. Their safety harnesses and rigging broke and stopped their decent, prior to actually hitting the ground below.