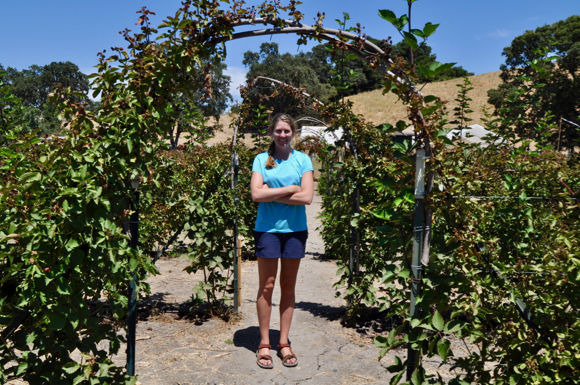 We’d driven out to Webb Ranch to talk with Atlee Frechette, a fourth generation Webb who earlier this year got involved in the farming side of the business — there is also a horse side — for the first time. Along the way we talked volleyball and baseball.

About the latter, Atlee is indeed named after former San Francisco Giants pitcher Atlee Hammaker and has a baseball signed by him. It seems her parents, Lyndal (Webb) and Tom Hubbard, are big Giants fans. 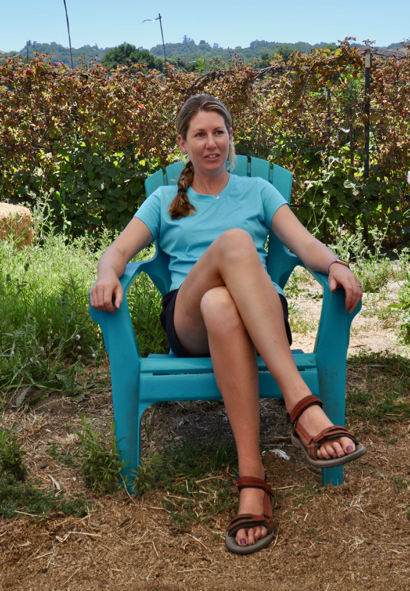 Until this March, Atlee’s involvement with the family business had taken a back seat to her other job as women’s volleyball coach at Menlo College. Next year, she’ll take on the role of men’s volleyball coach, when that sport is introduced at the school for the first time.

“Our growing season here is May to October and the men’s volleyball season is January to April, so I’m now able to do both,” said the Menlo-Atherton High School grad.

Atlee was very involved in the U-pick operation this year and showed us new signs by each row of berries identifying what kind. She says the Tuesday/Thursday/Saturday U-pick days will probably extend through July.

“I really love showing people the family business, one that’s been going on since 1922,” she says. “It’s such a pleasure to watch people enjoy what a great place this is and seeing their smiles. Here on the Peninsula, places like Webb Ranch don’t typically exist.”

As the berry season winds down, Atlee is getting ready for the fall offering, Webb’s pumpkin fields. She can also be found at Portola Valley Farmers Market on Thursdays through the end of the growing season.

“Wherever I am, I hear stories from locals and how they first became aware of the Ranch, when we had a small roadside stand in the 60s,” she says. “It’s a great connection — a small ranching business and local people.”

While Webb Ranch’s produce stand remains closed, produce from the Ranch is sold at Bianchini’s Market in Portola Valley and Sigona’s Market in Redwood City.