The first incident occurred at 2.16 pm 0n the Dumbarton Bridge involving multiple vehicles with one car on fire and injuries. Menlo Fire Engine 77 was actually on Bayfront Expressway headed to a training event with personnel in full protective fire clothing when the emergency call came in.

Captain Jason Martin and the crew of Engine 77 reported that they had a column of smoke showing from their vantage point less than a mile from the incident. They arrived on-scene at 2.20 pm and Captain Martin radioed that the vehicle accident was actually West Bound Highway 84, just short of the center span and involved two vehicles. A classic 1960’s convertible had been hit at a high rate of speed by a smaller, newer four-door vehicle with major front end damage and was on fire.

Miraculously, two women that were in the four-door vehicle that was on fire were standing outside of the vehicle when firefighters arrived. Despite the high speed and blunt force of the collision, both were saved by the vehicles front air bag deployment system and vehicle collision design. While shaken and upset, they were fortunately not injured.

The owner and single occupant of the other vehicle, a red 1969 Chevrolet Chevelle Classic Convertible was also not injured. He told Firefighters that the vehicle had experienced mechanical problems and stalled just short of the bridges center span. He had called for help and was outside of the vehicle actively waving at other vehicles traveling at high rates of speed trying to alert and warn them of the stalled car.

He said another vehicle had narrowly missed his car and changed lanes at the last second when the vehicle behind it with the two women in it ran directly into the back of his stalled vehicle. He quickly assisted both women in getting out of their car before it caught on fire. He was extremely relieved that they were both uninjured but shaken and unnerved by the experience. He told Firefighters that he had purchased the car when he was sixteen years old and had owned the car for over 40 years with few problems until today.

Captain Martin and the crew of Engine 77 blocked traffic East Bound Highway 84 to deploy their hose lines while the CHP completely blocked West Bound traffic so Firefighters could safely pull hoses across all three lanes to extinguish the vehicle fire in the number 3, or slow lane.

Menlo Engine Two and Battalion 1 also responded to assist with patient care and assessment, traffic control and in case more water was needed to combat the car fire which was quickly brought under control by 2.30 pm 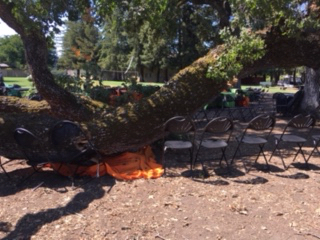 The second incident occurred at 2.22 pm, six minutes after the Dumbarton Bridge call.  A large tree branch had broken off and had collapsed on top of half a dozen people attending a party in the Quad at Menlo College located at 1000 El Camino.

Menlo Fire Engine 6 responded to the incident and arrived on-scene at 2.24 pm. Captain Jane Hunt reported that the tree branch has partially separated from the main trunk and had struck several people but no one was trapped. Additional Menlo Fire Personnel on Truck 1 and Engine 3 assisted Captain Hunts crew with the medical treatment of three people.

One patient had minor injuries and refused care while and an adult female had suffered a blow to the head and was treated by Fire Paramedics along with a one-year-old child that had suffered abrasions to the body. Both were transported by AMR Ambulance to Stanford Hospital.

Captain Hunt was advised that the injured were among hundreds attending a company picnic with Riverbed Technologies. Only moments before people reported hearing a “loud crack,” two dozen adults and children had been seated under the large heritage oak enjoying its shade and cooler temperatures when they left to engage in an activity. Half a dozen people remained when the cracking sound occurred and within seconds the three-foot in circumference branch split from the oak tree crashing down on top of them.

Fire Chief Schapelhouman said: “Menlo College is very diligent about maintenance and the up keep of their campus which includes a significant number of large, beautiful, heritage oaks. We will follow up with them regarding their tree safety inspections next week. I know the Fire crews that responded to this incident were extremely relieved that it wasn’t much worse than it could have been given the size of the group and proximity of the seating area under the tree. Other similar events have had far worse outcomes and it’s something to think about and have checked if you have large trees, given years of drought followed by a winter with such significant rain fall.”