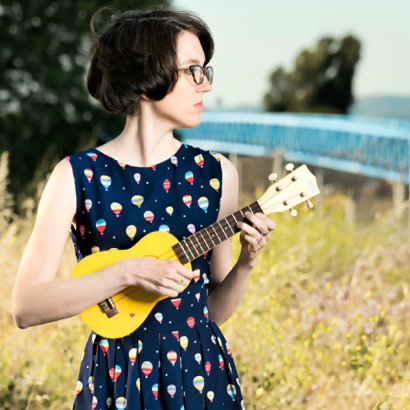 The Menlo Park Library will host a free concert at the City Council Chambers (701 Laurel Street) on September 2, at 11:00 am, featuring local musician Karla Kane (pictured) and Nottingham, England-based duo Fun of the Pier.

Karla Kane is a Redwood City singer, writer, and ukulele player, best known as the leader of indie-pop band The Corner Laughers, with whom she’s released four records. Her debut solo album, King’s Daughters Home for Incurables, will be released this Fall.

Fun of the Pier is an acoustic-pop band from Nottingham, England, led by the husband-and-wife team of Helen (vocals, guitar) and Mark (bass) Luker. They’ll be performing in California for the first time in celebration of the release of their own debut album.

The event is free, thanks to funding from the Friends of the Menlo Park Library, and refreshments will be provided.