InMenlo contributing photographer Robb Most captured a bit of the informal action this morning at the second annual Paws for Paws event in Menlo Park with a K-9 demonstration photo supplied by Menlo Park Police Chief Robert Jonsen. 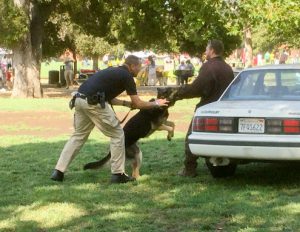 Profits from this year’s event funds MPPD’s K-9 program along with scholarships that support victims of crime as well as youth-related community sports programs.