The Mystery Reader’s Club invites the greater community to join them when they welcome local author Mark Coggins on Sept. 20 at 7:00 pm at the Menlo Park Library The crimes in his book Runoff take place in multiple spots throughout San Francisco and feature private investigator and jazz bass player August Riordan.

Coggins’ work has been nominated for the Shamus and the Barry crime fiction awards and selected for best-of-the-year lists compiled by the San Francisco Chronicle and the Detroit Free Press, among others. His novels Runoff and The Big Wake-Up won the Next Generation Indie Book Award and the Independent Publisher Book Award (IPPY) respectively, both in the crime fiction category.

Here’s some background on Runoff from the author’s website: 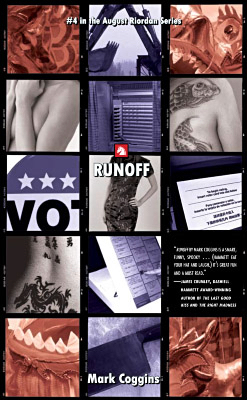 “How much does it cost to fix an election? August Riordan — private investigator, jazz bass player, smart ass with a foolish heart — is going to find out. He’s been hired by Leonora Lee, the all-powerful “Dragon Lady” of San Francisco’s Chinatown, to investigate the results of the city’s recent mayoral election. It seems the Dragon Lady’s candidate failed to even carry the Chinese precincts, and she’s convinced that someone must have rigged the outcome by hacking the city’s newly installed touch-screen voting machines.

“A runoff between the two remaining candidates is days away, but it takes Riordan mere hours to find the Director of Elections dead in his office. A visit to the offices of Columbia Voting Systems — the suppliers of the city’s touch-screen machines — results in another corpse. A wide range of political interests share a stake in the election, so Riordan’s got plenty of suspects.

“But when the Dragon Lady’s beautiful daughter is attacked after giving Riordan a goodnight kiss, it starts to get personal. Soon, Riordan is in a race not only against the runoff deadline, but against powerful political movers and shakers, Chinatown gang members, and crazed anarchists, with only his techno-savvy, cross-dressing friend Chris to help.

“The cost of fixing an election runs to as many lives as it does dollars, and if Riordan isn’t careful, the price for un-fixing it may be more than he can afford…”

The Mystery Readers Group meets at 7:00 pm on the third Wednesday of every month in the library’s downstairs meeting room.