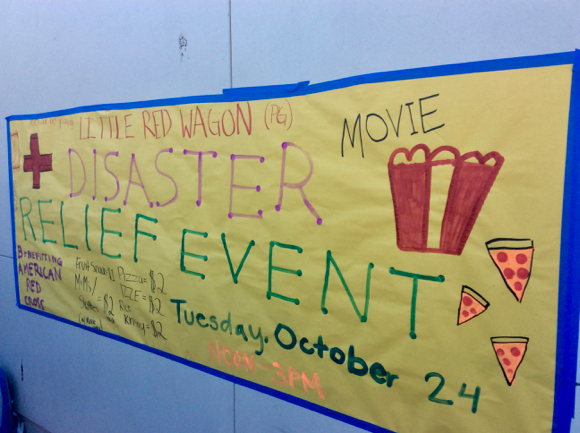 On October 24, 2017, Menlo Park’s Hillview Middle School Service Team hosted an event to benefit the victims of the North Bay fires. Students enjoyed the company of guest speakers, including Menlo Park Police Department’s Officer Ferguson and Muhi Khwaja from the American Red Cross. In total, the event was able to raise $7,287 to help support fire victims.

Officer Ferguson spoke of her time in Santa Rosa as a police responder and shared some of the stories of those who lost everything. She explained that the Menlo Park Police Department is starting a gift card drive and is working with local schools to help get the word out. It does not matter how much money the gift card is worth; even a Starbucks gift card could provide a warm cup of coffee and a bright spot in an otherwise challenging situation. If anyone would like to donate, there will be an envelope in the Hillview Middle School office now through November 17th.

Students then watched a movie called The Red Wagon. It is a true story about Zach Bonner, a boy who was able to make a difference after Hurricane Charley. After the movie, students wrote letters to show support for those affected and to thank first responders for their life-saving work.

Gina Parks, Hillview’s Service Team Parent Coordinator, had this to say about the event: “We had no idea what to expect when we started planning this event.  It started out as a Hurricane Relief Event for the American Red Cross and morphed to a Disaster Relief Event after the earthquake hit Mexico.

“After the wildfires engulfed the North Bay, we decided that the money raised should go directly to the American Red Cross California Wildfire Fund. Our goal was to engage our students in learning while giving them the chance to give back. We were overwhelmed by the curiosity and generosity of our students and their families.  The community really came together in the spirit of giving.”