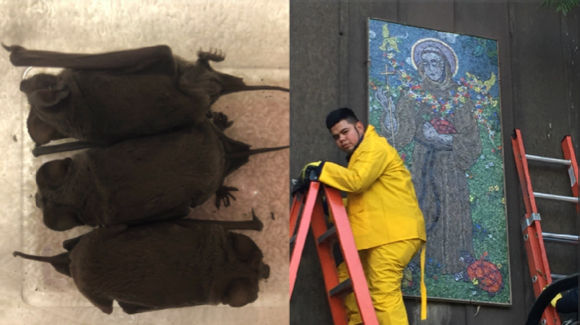 This has the makings of a perfect Onion story, yet it’s true.

Workers removed a mural of St. Francis of Assisi, the patron saint of animals, from an exterior wall of a Menlo Park home only to find it housed the living quarters of 83 bats.

According to Peninsula Humane Society spokesperson Buffy (can’t make this stuff up!) Martin Tarbox, they were taken to the Society’s headquarters in Burlingame to be checked out, pronounced fit to return to the wild, and were released near the home where they were discovered. So Buffy, in this case, is a bat rescuer rather than bat (as in vampire) slayer.

The bats found on the Peninsula are Mexican free-tailed bats. They are quite small and not easily detected, and listed as a “special species of concern.”

The Humane Society asks residents who have bats living in or around their home, to call the organization at (650) 340-7022.

Footnote: News of Menlo Park’s bat colony is making its way into newspapers and news outlets across the country. Guess we’re headed towards a batty new year (sorry couldn’t resist)!