Jim Rutter’s latest endeavor is all about sports – and you! 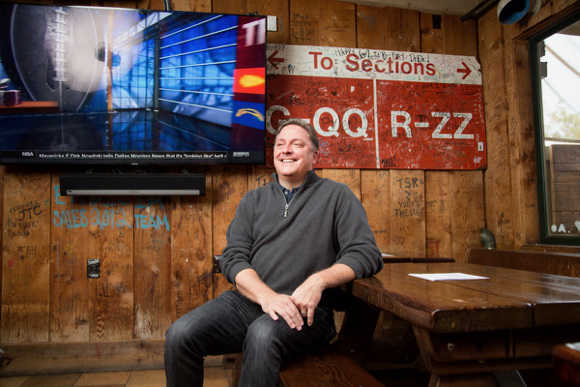 Sports have long been part of Menlo-Atherton High School grad Jim Rutter’s life. Growing up, he played Little League with former 49ers quarterback John Paye who later was a fraternity brother at Stanford.

“I wasn’t a great athlete but participated in football, wrestling and baseball at M-A,” he said recently at the Dutch Goose, seated in front of a part of the old Stanford stadium before it was remodeled. “It’s section R near the 40-year-line,” he recalled.

Jim should know such trivia as he’s been a volunteer Stanford Athletics Archivist for over a decade, not surprising given that he has roots with the school that go back four generations; his great grandfather was in the pioneer class of 1895.

But it’s only recently that he’s been professionally involved in sports. He joined the emerging social networking platform, YourSports, in late 2013 and was named CEO in 2015.

“The mission is to build a single, intergrated platform that wires the world to sports,” he said. “We want to connect each and every athlete, coach team, league, sports-related organization, event, trophy, venue, rivalry and object as well as all the ‘fans,’ ‘followers’ and ‘foes.’ Our database includes over a million sports-related entities.

Jim explained that it might be helpful to think of YourSports as a personal and professional networking platform that combines elements of Facebook, LinkedIn, IMDb, ESPN and Wikipedia.

“We have the courage of conviction that people relate through sports more than anything else,” he said. “It’s absolutely tribal. We don’t think we’ve even scratched the surface of an enormous global market.”

In addition to the YourSports website, a mobile is available on Apple’s App store and Google’s Play store. The company is also seeking investors for participation in a $3,000,000 Series A Preferred Round.