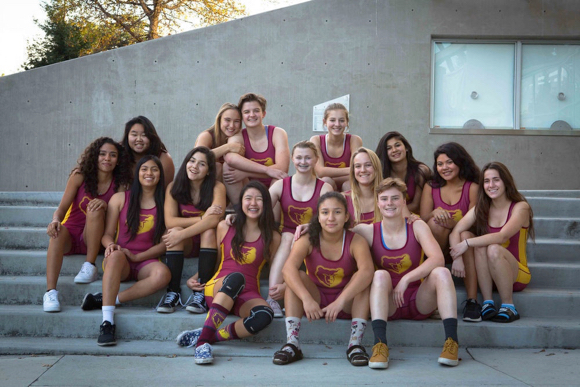 Feb. 7 update from the M-A Chronicle: “The M-A girls wrestling team brought home the Central Coast Section (CCS) championship title for the second year in a row this past weekend, concluding another fantastic season. The team had six wrestlers qualify for state championships: four individual champions with sophomore Anna Smith and juniors Lauren McDonnell, Abby Ericson, and Folashade Akinola; juniors Angie Bautista and Evelyn Calhoon made it to the championship round but both ultimately fell short of the title. Senior Livienna Lie also placed sixth.”

Just three years ago, the Menlo-Atherton High School Girls Wrestling team had only one member, Chelsea Wilson, who was one of the top female wrestlers in the state of California.

However, in the fall of 2015, M-A Wrestling coach Phil Hoang decided to do something different; he began heavily recruiting freshman boys and girls in their PE classes to join the M-A wrestling team.  “Little did I know when we were recruiting from those PE classes, that a group of future warriors was among us!” he said. What began as a team of first-time girl wrestlers in the fall of 2015, became the first place winning team out of 59 schools a year ago at California’s Central Coast Section (CCS) Championship Tournament 2017.

Once again, the M-A Girls Wrestling team is ranked first as they head to defend their title at the CCS Tournament 2018 this Friday and Saturday, February 2 and 3, 2018, at Overfelt High School in San Jose. Three members of the M-A team are ranked 1st in their CCS weight classes — Angie Bautista, Lauren McDonnell, and Abby Ericson — and two, Anna Smith and Paola Ramirez, are ranked third.

Led by Team Captain Lauren McDonnell, the M-A girls team is ready for the tournament: “Over the past two years since our team formed, we’ve significantly developed our skills, both individually and as a group. We’re very aligned as a team now and really looking forward to seeing what we can accomplish at CCS 2018.”