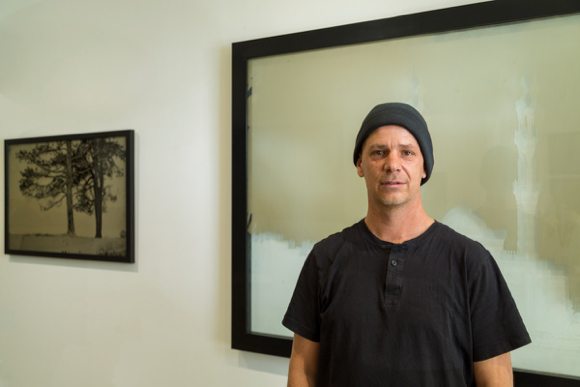 When invited to view “the world’s largest ambrotype” at Art Ventures Gallery in Menlo Park, there was an immediate pivot to discover just what this was. A quick web search revealed that an ambrotype “is a positive photograph on glass made by a variant of the wet plate collodion process. Like a print on paper, it is viewed by reflected light”

The Gallery is currently exhibiting 20 contemporary, one-of-a-kind “ambrotypes and tintypes” made by photographer Ian Ruhter. “Dream House|Bombay Beach, Ca 2017″ is the largest, measuring 66″ by 90” and weighing, when framed, 350 pounds.

Visiting with Ian at the gallery, we learned that he grew up in South Lake Tahoe, enjoyed snowboarding but struggled at school. Given a film camera in his early 20s, he found photography to be a way that allowed him to communicate. “For once in my life, I had a voice,” he said. 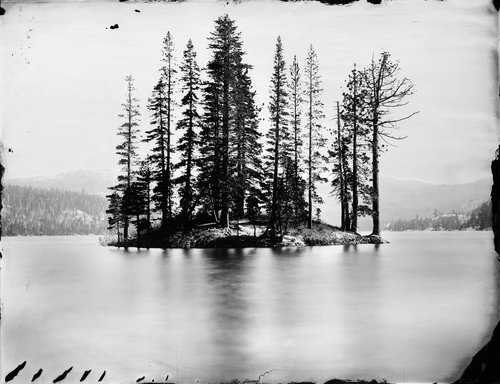 He found almost instant success as a commercial photographer living in Los Angeles. “But as photography turned digital, I became disheartened with the manipulating of photos,” he explained. “The image no longer stood for the truth.

“In switching from commercial to fine art, I did quite a bit of studying about photography in general and as an art form. One of the things that bothered me was that, for the most part, there is no original in photography. Once you make a copy, you degrade it.”

Ian turned to a 19th century process called wet plate collodion. “I was drawn to direct positives, singular images, meaning there is only one,” he said.”

A delivery truck was re-purposed by Ian to become the world’s largest wet plate collodion camera, featuring a giant, 30-pound lens. Inside the truck is a mobile darkroom that he used to made wet plates in the field.

To make “Dream Home,” Ian went a step further. He traveled with his team to Bombay Beach, CA, a one-time desert oasis that was in a state of decay. There he created a camera out of one of the abandoned houses “breathing new life into this structure once again making it a home.”

Seven years of Ian’s work are on display at Art Ventures (888 Santa Cruz Avenue) in an exhibit titled “Perfect Imperfections: Contemporary Ambrotypes and Tintypes,” which will run through March 14. They range in price from $25,000 to $450,000, the latter being the price for “Dream Home.” [Note: the gallery is offering a catalog of Ian’s work for $65.]

“It often takes months of preparation to make one image,” he said. “I had to make a commitment, knowing the images would be very expensive. But, then again, there aren’t 350 in the world.”