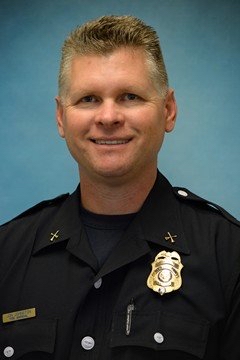 The Menlo Park Kiwanis Club hosts noontime lunch at Allied Arts, followed by  talks and conversation. The public is invited. Speakers during March include:

Fire Marshal Johnston (pictured right) began his career with the Menlo Park Fire Protection District in July 2000.  He began as a Fire Protection Specialist and worked his way up the ranks, becoming Fire Marshal in 2014. When wild fires ravaged so much of Northern California recently, it took many fire departments from around the state to help contain the fire. Johnston will talk about the Tubbs fire, organizing the fire-fighting efforts, and the use of drones to help contain the fire.

Menlo Park is changing the way City Council members are elected, from at large elections to “by district” elections. In response to a lawsuit threat last August alleging that the City’s voting system didn’t provide fair representation to all of its citizens, the City Council moved to tackle the problem and work began. This March it will consider a recommended district map, and it will hold hearings for public input in April. If all goes smoothly, the map will be submitted to the San Mateo County Registrar of Voters in May. The first by-district election in three districts (and possibly for Mayor) is slated for November, with the first by-district election in the remaining districts is to take place in November 2020.

Freedom House works closely with law enforcement and community partners to identify survivors of human trafficking, and to provide them with the care and services they need to rebuild their lives. A meeting and events professional, Stefanie Chow spends the majority of her free time developing her public speaking and leadership skills through Toastmasters, sharpening her communication skills by serving as an advocate volunteer for Freedom House.

Paws for Purple Hearts, working with Bergin University of Canine Studies, is dedicated to improving the lives of America’s active duty military personnel and veterans suffering from PTSD, TBI and other stress disorders.  Veterans enrolled in Canine-Assisted Warrior TherapyTM programs learn to train future service dogs for other injured comrades.  Ellen Fisher is a Therapeutic Instructor for this nationwide program at Veterans Administration & Medical Center in Menlo Park. A non-profit, all services are provided free to veterans.

Kiwanis Club Meetings are held every Tuesday at Allied Arts Center, from 12:00 – 1:15, and the club welcomes visitors. Contact the club to attend any of the programs or for more details.