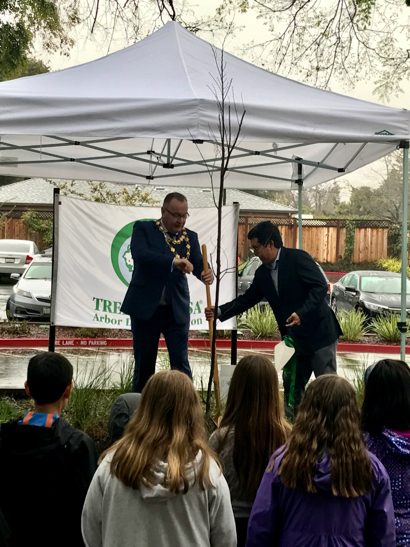 A drizzly Irish day was the perfect backdrop for a gathering of sister cities, friendship trees, and curious school children as a new tree was planted at the Laurel School Upper Campus earlier this month.

Menlo Park Mayor Peter Ohtaki was joined by Galway Mayor Pearce Flannery, and hosted by Principal Linda Creighton and Assisstant Principal Ellen Kraska of Laurel School, as many Laurel students and staff from the City of Menlo Park and Menlo Park City School District looked on.

The two mayors planted a Sawleaf Zelkova, chosen for its lovely fall color and its diminutive size, as it is fittingly planted under the canopy of an elm which was itself a gift tree from a Galway school 55 years ago. A similar planting ceremony with the Menlo Park mayor, Irish dignitaries, and school children took place at the school site on March 15, 1963 for the elm tree.

Menlo Park and Galway, Ireland, have been connected as sister cities since the 1960s.