Spotted: Sharks at the Circus Club raising money for Boys & Girls Clubs of the Peninsula 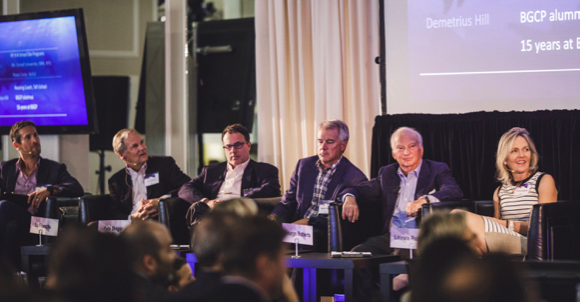 In its own version of the popular “Shark Tank” TV show, the Boys & Girls Clubs of the Peninsula brought some of Silicon Valley’s most successful investors together to support students living in the Peninsula’s low-income neighborhoods.

The six Shark investors — (pictured left to right) Alan Waxman, Stu Francis, Pete Briger, Mark Stevens, George Roberts and Linnea Roberts — and an audience of 180 gathered at the Menlo Circus Club in Atherton and blew past BGCP’s goal of raising $1.6 million, ultimately raising $2.6 million to close the opportunity gap for low-income students — an increase of more than 1 million dollars from last year’s event.

Two BGCP teams of staff and alumni pitched programs to the Shark investors and asked them, “Who’s in?” The pitches were framed in true Silicon Valley fashion to communicate their value proposition and return on investment.

“I’m deeply appreciative of the Sharks who each invested so generously in BGCP students,” said BGCP Executive Director Peter Fortenbaugh. “The record support given by our guests means that more low-income students can succeed in school – and our kids can get the depth of support they want, year after year. I’m incredibly proud of our BGCP alumni who pitched the Sharks. Their achievements show that access to opportunity can impact a person’s life.”