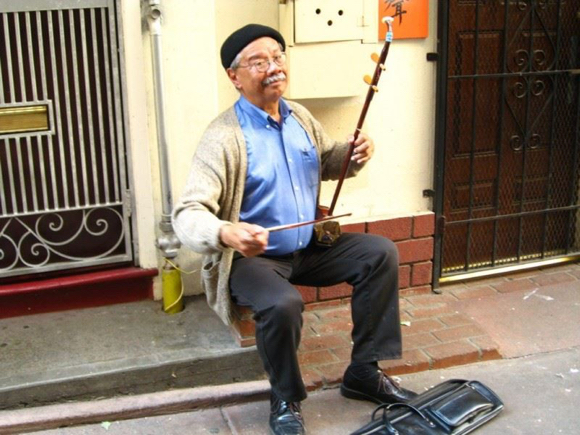 On May 22 at 7:00 pm, the Menlo Park Main Library will host master storyteller, author, historian and musician Charlie Chin, bringing history to life as “Uncle Toisan.”

As the history-based character, Chin will deliver a Chautauqua-style performance featuring a Chinese-American immigrant’s unique life in the United States. Highlighting the Chinese Exclusion Act, detention at Angel Island, World War II, the post-civil rights era, and the emergence of Asian-American consciousness, “Uncle Toisan” is a powerful, affecting, and educational experience.

Chin is a native of Jackson Heights, Queens, New York, now living in San Mateo. He  has presented at organizations including the American Museum of Natural History, Lincoln Center for the Performing Arts, and the Smithsonian Institution. He has also published several children’s books, including China’s Bravest Girl: The Legend of Hua Mu Lan (1992) and Clever Bird (1996).

The event is one in a series in association with the traveling exhibition Wherever There’s A Fight: A History of Civil Liberties in California, on display through the end of May at the Menlo Park Main Library.

Funding for this free event comes from the Friends of the Menlo Park Library.