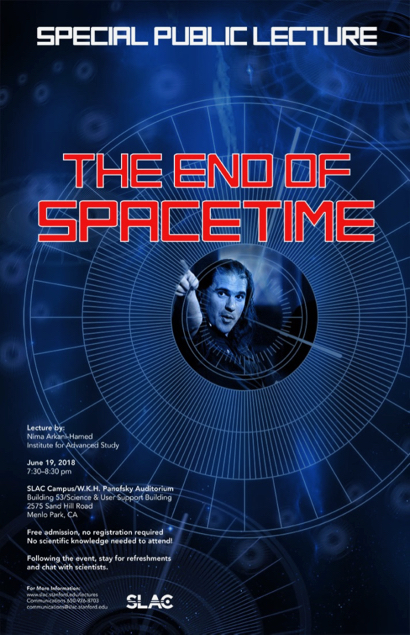 SLAC presents a free public lecture by Nima Arkani-Hamed titled “The End of Spacetime” on Tuesday, June 19 at 7:30 pm at the Panofsky Auditorium (Science and User Support Building (BLDG 53)

In this talk, Arkani-Hamed will review these paradoxes and describe indications for a new picture where spacetime and quantum mechanics will be seen to emerge hand in hand from more primitive principles, making contact with new areas of mathematics. He will give concrete examples of how these ideas work in the context of scattering amplitudes, describing particle collision experiments of the sort performed at the Large Hadron Collider.

Nima Arkani-Hamed is a theoretical physicist with broad interests in high-energy physics and cosmology. He was educated at Toronto and Berkeley, held a postdoctoral fellowship at SLAC National Accelerator Laboratory, and was a professor of physics at Berkeley and Harvard before joining the Institute for Advanced Study in 2008. He was an inaugural recipient of the Fundamental Physics Prize in 2012, and was one of six physicists featured in the documentary “Particle Fever” in 2014.