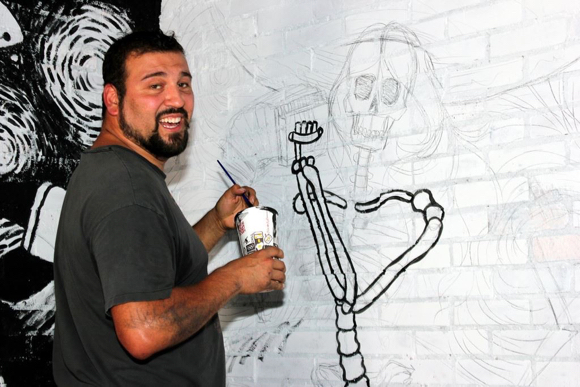 Former Simpsons TV artist Carlos Nieto III promises adults “everything you ever wanted to know about anime but were afraid to ask!” All drawing equipment will be provided. The event takes place on July 21 from 1:00 to 2:00 pm at the Belle Haven branch of the Menlo Park Library (413 Ivy).

Carlos, of Colombian roots, was born and raised in Los Angeles. Growing in the Hispanic area of Silverlake /Echo Park, he was influenced by the mish-mash of Central American and South American cultures. He is a mostly self-taught artist, only having taken some basic classes of art in high school, and several night classes at various colleges.

He has worked as a layout artist on the Emmy-winning TV show “The Simpsons,” as well as “King of the Hill.” He has also served as a visual consultant for Disney and Universal, creating sketches and final art for set designs. He conducts his comic book making, anime and animation drawing workshops at libraries across the country, and is an Artist in Residence at Children’s Hospital Los Angeles.

This event is made possible thanks to funding from the Friends of the Menlo Park Library.