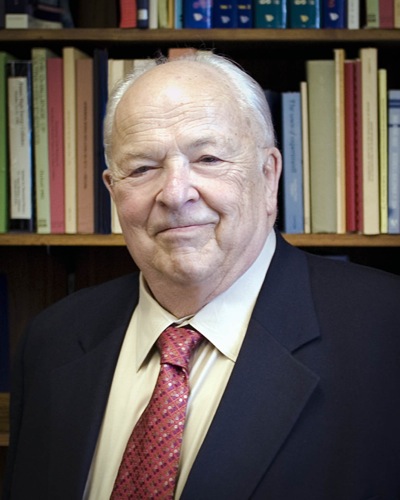 Burton Richter, the Paul Pigott Professor in the Physical Sciences, Emeritus, former director of the Department of Energy’s SLAC National Accelerator Laboratory in Menlo Park, and winner of the 1976 Nobel Prize in physics, died July 18 in Palo Alto. He was 87.

Richter’s Nobel Prize-winning discovery of the J/psi subatomic particle, shared with MIT’s Samuel Ting, confirmed the existence of the charm quark. That discovery upended existing theories and forced a recalibration in theoretical physics that reverberated for years. It became known as the “November Revolution.” One Nobel committee member at the time described it as “the greatest discovery ever in the field of elementary particles.”

“We mourn the loss of Burton Richter as a major figure in the field of physics and as the leader of SLAC during a critical period in its history,” said Stanford President Marc Tessier-Lavigne. “His co-discovery of a new subatomic particle changed physics forever, and his leadership of SLAC empowered many others to achieve transformative scientific discoveries. His many honors, including the Nobel Prize and the National Medal of Science, are testament to his lasting contributions to Stanford and to our world.”

Richter was remembered as a talented physicist whose achievements laid the groundwork for many decades of discoveries.

“Burt was unique in that he was both a particle physicist and an accelerator physicist, whereas most people are one or the other,” said SLAC Director Chi-Chang Kao. “This rare combination gave him the vision and also the daring to build the SPEAR Storage Ring to look for new elementary particles, which led to him winning the Nobel Prize in physics for discovery of the J/psi particle. Burt was an inspiration for us all to be bold in what we aim for.”

Stanford Provost Persis Drell, who served as director of SLAC from 2007 to 2012, said Richter was farsighted in his leadership of SLAC. “Burt was a visionary director of SLAC, with a forceful personality and a tremendous drive. His fingerprints are all over many of the advances in accelerators in the 20th century, as well as in the development of the X-ray light sources enabled by electron accelerators.”

Inspired by the stars

Richter was born in Brooklyn, New York, on March 22, 1931. His love of science started during the nightly blackouts during World War II, meant to foil potential air raids. Those pitch-black nights revealed an unparalleled view of the night sky and a hazy band of stars known as the Milky Way.

Richter received his Bachelor of Science degree in 1952 and his doctorate in physics in 1956, both at the Massachusetts Institute of Technology. While there, Richter had access to a particle accelerator, where he began working with powerful machines that that could isolate, accelerate and control beams of electrons. That work brought Richter to Stanford’s High-Energy Physics Lab in 1956 as a research associate. In 1960, he became an assistant professor of physics, made associate professor in 1963 and was promoted to professor in 1967. During this time, Richter married his wife, Laurose, and had two children, Elizabeth and Matthew.

It was at SLAC (then known as Stanford Linear Accelerator Center) where, in the early 1960s, he designed SPEAR, the Stanford Positron-Electron Accelerator Ring. It included a groundbreaking type of detector that has been used in particle colliders ever since, and it would eventually produce his biggest discovery. This was the first of several accelerators Richter would design.

“Burt Richter was a superb physicist, especially because he knew about both accelerators and particles, which is rare,” said SLAC Deputy Director Emeritus Greg Loew, who developed the design of the 2-mile-long Stanford Linear Collider and led its turn-on in 1962.

After Richter secured funding for SPEAR in 1970, it took him just 27 months to build the accelerator, at a cost of $6 million. Experiments commenced in 1973 and on November 10, 1974, a Sunday, Richter and team witnessed history – a new subatomic particle.

The next morning, Richter told a colleague at MIT, Samuel Ting, about the discovery. To his surprise, Ting had just discovered the same particle. Ting called his particle J. Richter dubbed his psi. In the “November Revolution,” the researchers issued a joint introduction of the J/psi to the world. Two years later, they would share the Nobel Prize. Richter was just 45, among the youngest Nobel recipients ever.

“It was the last step the scientific community needed to believe that charm quarks were real, and was a major step on the way to the Standard Model of particle physics that describes all the fundamental particles and forces,” said Martin Breidenbach, a professor at SLAC and Stanford who began working with Richter as a postdoctoral researcher in the late 1960s.

“In my career I have met no one who has made more fundamental contributions in electron-positron and electron-electron colliders, in the precision instrumentation used in colliders and in experimental physics,” Ting said. “After we received the Nobel Prize together in 1976, I met him many times and we became good friends. My wife, Susan, and I are going to miss him deeply.”

In 1984, Richter became director of SLAC, a job he held through 1999. During that time, Richter oversaw the construction of the Stanford Linear Collider, which produced much more energetic collisions and was the only one of its kind ever built. Other machines followed, positioning SLAC to take advantage of new frontiers in photon science.

“Perhaps his greatest contribution as director was, in the 1990s, designing a future for SLAC that would look very different from the past,” said Drell. “He recognized that pursuing an X-ray free-electron laser at SLAC could be used to provide a revolutionary science opportunity to the photon science community who use X-rays as their tool for discovery. This vision became the Linac Coherent Light Source. Burt recognized that outstanding science needed to drive the future of the institution, and he did not flinch from designing that future.”

When he stepped down as SLAC director, Richter focused on public policy issues in science and energy, for which he received the prestigious 2007 Philip Hauge Abelson Prize from the American Association for the Advancement of Science. In 2010, nearing 80, Richter published Beyond Smoke and Mirrors: Climate Change and Energy in the 21st Century, an apolitical layman’s exploration of the real facts of climate and energy. In the book, he decried the deniers and the catastrophists alike, emerging as an unabashed advocate of nuclear energy.

“With Burt’s passing, we have lost a great physicist and a great friend,” said former Secretary of State George Shultz, a distinguished fellow at the Hoover Institution. “I was privileged to work with Burt at Stanford over many years, most recently in the course of our energy task force meetings at the Hoover Institution. We would discuss a wide variety of energy topics, and by the time any speaker was winding up, the group would naturally turn toward Burt’s seat, knowing his name card would be up. Nothing got by Burt Richter. I will miss him, but his spirit will live on.”

In addition to sharing the Nobel Prize, Richter received the nation’s highest scientific honor, the National Medal of Science, in 2014; the U.S. Department of Energy’s Enrico Fermi Award in 2012; and the DOE’s Ernest Orlando Lawrence Award in 1976. He was a member of the National Academy of Sciences, a fellow of the American Academy of Arts and Sciences and the American Association for the Advancement of Science, and former president of the International Union of Pure and Applied Physics and the American Physical Society. Richter was also a member of JASON, an independent group of scientists that advises the U.S. government.

Richter is survived by his wife, Laurose; daughter Elizabeth Richter of Columbia, Maryland; and son Matthew Richter, daughter-in-law Cheryl Richter and grandchildren Allison and Jennifer Richter, all of Woodside, California.