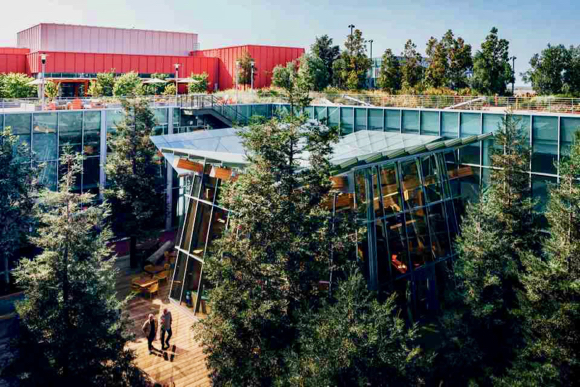 Facebook announced the completion of its latest building, MPK 21, designed by architect Frank Gehry and featuring a 3.6-acre rooftop garden with 200 trees and a half-mile meandering pathway.

Bringing the outdoors into the office space, The Town Square (photo top) is a sheltered green space with 40-foot-tall redwood trees, and The Bowl (photo below) is an amphitheater-style courtyard that connects MPK 21 with another Gehry-designed building, MPK 20. 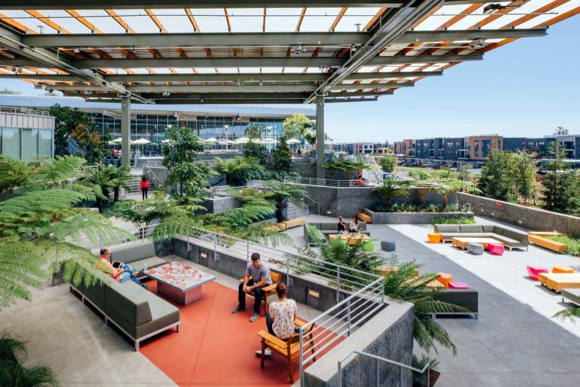 A single pathway runs the length of the building. Along the path are five dining options, 15 art installations commissioned through the company’s Artist in Residence Program, and a 2,000-person event and meeting space.

Previously, Facebook enrolled in Peninsula Clean Energy’s ECO100 energy option to reduce its carbon footprint, which will help Menlo Park reach its local climate action goals. A reclaimed water system will save about 17 million gallons annually and 175,000 square feet of fritted windows will protect birds. A 1.4-megawatt photo-voltaic solar panel system placed on the roof and on the carports will generate almost two million kilowatt hours of electricity annually.

“As we add offices in other cities in the Bay Area, we remain invested in Menlo Park, which will be our headquarters for the foreseeable future,” wrote John Tenanes, Facebook’s VP Global Facilities and Real Estate, in a press release. “It was important to us that MPK 21, which sits on a former unoccupied industrial site, be consistent with the natural environment and our neighboring communities.

“Next year we plan to complete a two-acre park with a public plaza and event space, which can host our Facebook Festivals, mobile farmers’ market and other local programs. A highlight of the project will be a community bike and pedestrian bridge over the Bayfront Expressway. This landmark feature will connect the neighborhood and our campus to recreational trails and parks along the San Francisco Bay.”