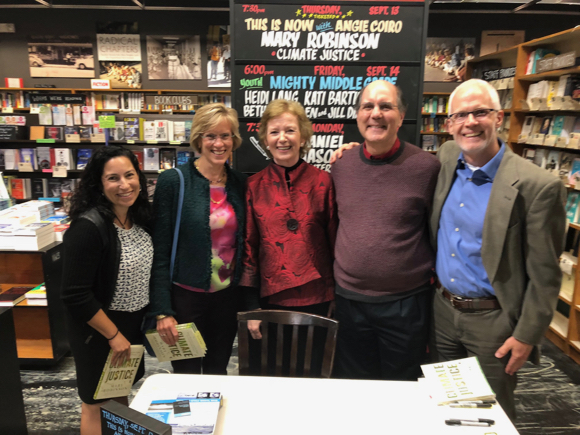 Last week thousands of people who care about climate progress converged at events around the Bay Area for the Global Climate Action Summit.

We at Menlo Spark were fortunate to have Mary Robinson, former President of Ireland and internationally recognized leader on human rights, come to Kepler’s Books on September 13 to talk about how climate change has impacted people all around the world.

Special guest, Hindou Oumarou Ibrahim, joined the conversation with Angie Coiro to tell the story of how her native village in the Republic of Chad has struggled in recent years with climate impacts of drought and extreme weather.

Both speakers radiated hope that we can create a resilient, clean energy future for everyone from nomadic peoples of the Republic of Chad to coastal communities in North Carolina.

Climate change is affecting all of us, from hurricanes deluging coastal communities with twice as much flooding, to the gradual creep of sea level rise, intense heat waves, more destructive wildfires, and failing crops. The Global Climate Summit showcased how everyone can come together to transition away from polluting fossil fuels and create a clean energy economy.

Governor Jerry Brown started the Summit with a surprise announcement that California would aim to be fully carbon neutral by 2045. And we’re not alone. Over 400 companies, cities, states and regions made big commitments to advance climate progress though electric vehicles, zero carbon buildings, reducing food waste, restoring forests, and investing $13 trillion in assets.

Here in Menlo Park we’re off to a great start, leading the way to a clean energy economy. Shortly before the Climate Summit, Facebook announced a big commitment to cut its carbon emissions 75% and use 100% renewable power by 2020.

The City of Menlo Park made a similar commitment to renewable power last year and is on track to meet one of the most ambitious local climate targets for 2020.

Over the next year, the City of Menlo Park could take bold action with new climate targets for 2025 that include commitments to zero carbon buildings (which 22 cities have pledged) and transition to green and healthy streets (25 cities signed pledged).

There’s so much that each of us can do to be a part of the solution to global climate change right here in Menlo Park. We hope you’re inspired to act! You can find ideas for personal actions online.