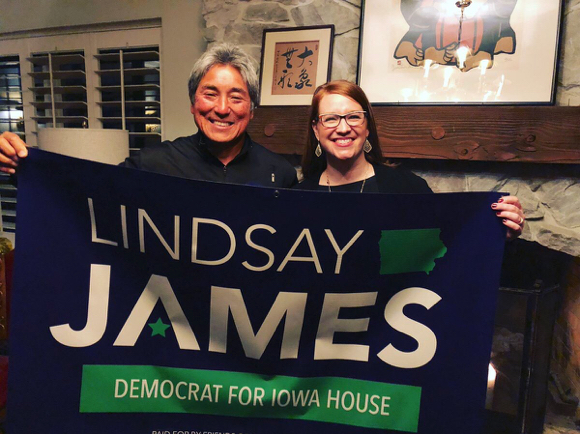 Former Menlo Park resident Lindsay James makes a return appearance in her bid to gain a seat in the Iowa House of Representatives. She’ll be the focus of attention at a fundraiser hosted by two Menlo Park families, the Geisers and the Hales on September 27.

Thanks in part to a previous fundraising effort hosted by Atherton residents Beth and Guy Kawasaki [the latter pictured with Lindsay], she successfully won the primary election last June to represent District 99 which includes Dubuque.

A pastor and teacher by profession, Lindsay felt moved to do something following the 2016 Presidential election.

“The need for diversity in the Iowa legislature was clear. Currently, there are less than one in four women. Just think of the issues that get lost. Two-thirds of low wage earners are women. The cost of childcare is $9,000 a year per family. Women get caught in cycles of poverty. These are issues we don’t necessarily hear about. There is so much at stake.”

Lindsay said she’s been touched by the number of women who’ve cheered her on and encouraged her to “muster the courage to step into something difficult.”

She is first to admit that running for a state level position is not as spectacular as seeking national office but points out that Iowa is in the rust belt with its economy reeling. “A lot of attention is paid to what’s going on in Washington and sometimes we miss what’s happening on the local level, ” she said, adding “This is bleak times for Iowans.”

Event co-host Kristin Geiser became friends with Lindsay when she lived here. “She wasn’t born seeking public office,” Kristen said. “But rather, she stepped up when she saw a need. She displays a steadiness and courage at the same time.

“As a pastor serving as a college chaplain, she was a listener, one who drew people together. She’s committed to inviting more voices into the conversation and making connections with one another.

“After we set the date for our event, we found out that ‘When We All Vote,’ a non-partisan organization that formed in July 2018 to focus on voter education and registration to improve voter participation, has a ‘Week of Action’ where events will be held across the country to encourage voter engagement. It turns out that our event falls during their week of action, and we are officially registered as a week of action event.”