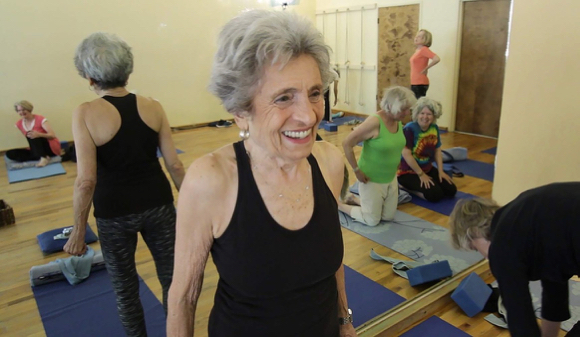 The UNAFF for Seniors documentary special screenings program has made a return to Little House after a few years hiatus, and is joined by a new documentary series “co-curated” by the center’s Program Coordinator Kamilah Najieb-Wachob and community member Judy Adams, who organized the Save the Guild theater petition.

Both series will offer documentaries on Wednesday afternoons, once a month.

UNAFF has already held its first screening with three films by Menlo Park filmmaker Dorothy Fadiman on October 3rd, with the next program on November 7th. You can pick up flyers for the first 6 months of the series Little House, or read about them in the monthly Little House newsletter.

The first two documentaries in the Cinema Conversation and Coffee series screen on Wednesday, Oct. 17, with films about women and yoga. The subject of the first documentary, the noted octogenarian yoga instructor of the Peninsula, Lolly Font (pictured), will be at the screening to introduce and discuss the film  called “Lolly Font: Yoga Rebel.” The second documentary is “Yogawoman” (2013) about women’s contributions to the development of yoga.

Coffee/tea and light refreshments will be available.

The regular schedule for both series (please note the different time for each): UNAFF for Seniors will be on the first Wed. of every month at 1:30. UNAFF films are free. Cinema Conversation and Coffee (tea is also served!) will be on the third Wed. of every month at 1:00 – 3:30 pm (except Nov.). These films are free for Little House members and a nominal $3 for non-members.