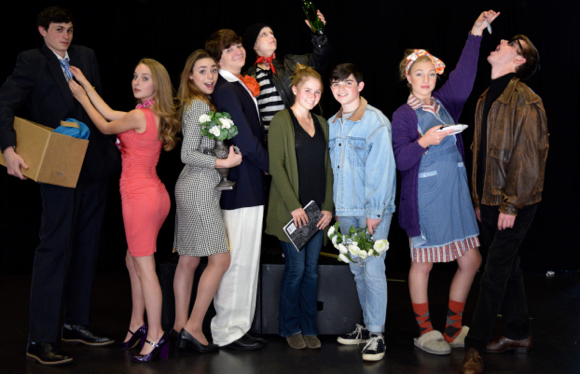 Menlo Drama is presenting Noises Off , a play-within-a-play where the drama behind the curtain is as funny as the farce on stage.

Performances run Friday, November 16 at 7:30 pm, Saturday, November 17 at 2:00 pm and 7:30 pm, and Sunday, November 18 at 5:00 pm in Florence Moore Auditorium at Menlo School, 50 Valparaiso Avenue, Atherton. Tickets — $10 for adults, $5 for students — are available for advance purchase online.  Tickets may also be available at the door one hour before each performance. This production is suitable for middle school audiences and above.

British playwright Michael Frayn’s Noises Off is a  slapstick story of a mediocre troupe of actors, their overly-ambitious director, and the chaos that ensues when their offstage romantic rivalries and behind-the-curtain dalliances upstage the show they are trying to perform. This three-act play-within-a-play follows the struggling theater group through dress rehearsal, a backstage view of the play, and a near closing night catastrophe, when slamming doors, flying sardines, falling trousers and general pandemonium render the production completely unhinged.

“There is something to love about every moment in this show,” says junior cast member Nils Forstall. “Whether it’s the drama, building tension, or good old-fashioned slapstick humor, this show is filled with unique hilarity and charm that shouldn’t be missed.”

In the director’s chair for Noises Off is Menlo School’s Director of Communications Alex Perez. Formerly the Director of Drama and Director of Creative Arts, Perez is thrilled to be returning to the Menlo stage. “It’s a gift to work with our talented drama students,” he says. “They are incredibly dedicated and hardworking. It’s the best part of my day to spend time in rehearsals with them.”

Perez chose this show in part because it is considered one of the funniest plays of all time, and also because of the unique challenges it presents for the actors. According to Perez, Noises Off  “is basically three mini-plays covered in three acts, with each act almost like the one before and yet different enough to make it difficult for the actors to keep track.”

Continuing its tradition of philanthropy through Menlo Drama Gives Back, this production of Noises Off will benefit Children’s Healing Project, a theater-based therapeutic arts education program for critically ill children hospitalized at Lucille Packard Children’s Hospital. Over the past five seasons, Menlo Drama has raised more than $32,000 for the benefit of specific nonprofit organizations whose missions align with a central theme of the current show.

The Noises Off cast chose the Healing Project, a partnership between TheatreWorks and Packard, for its mission to bring the joy and laughter of theater to children most in need of its healing magic.