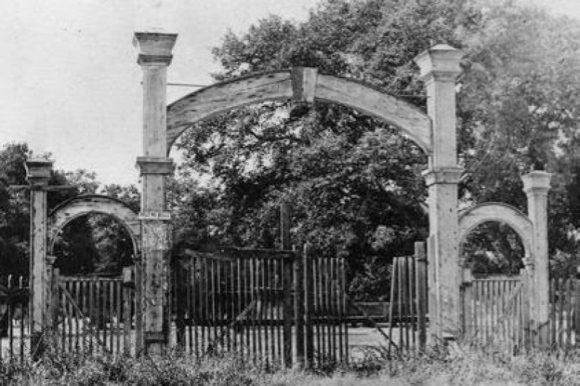 The several year effort to collect funds to reproduce the Menlo Gates (originally constructed 1852-4) that gave Menlo Park its name is rapidly coming to a conclusion.

The Menlo Park Historical Association  now has an agreement with the City of Menlo Park to donate $43,000 in a matching fund a contract with Sinnott & Co. to construct and install the replica Gates on the City’s Burgess campus over the sidewalk on Alma St near Ravenswood Ave. Construction has started! You should see something appearing at the site next week.

The good news is that construction of the Menlo Gates has begun. The steel frame should be installed in about one week, maybe Nov 28th. The entire construction and installation should be completed by the end of December.

The bad news is that the cost (now fixed by a construction contract with Sinnott & Co) has risen to $97,000. We now need to raise an additional $14,000 to complete the project. Your donation will help.