Wondering where all the wild turkeys come from? Here’s the answer, thanks to POST 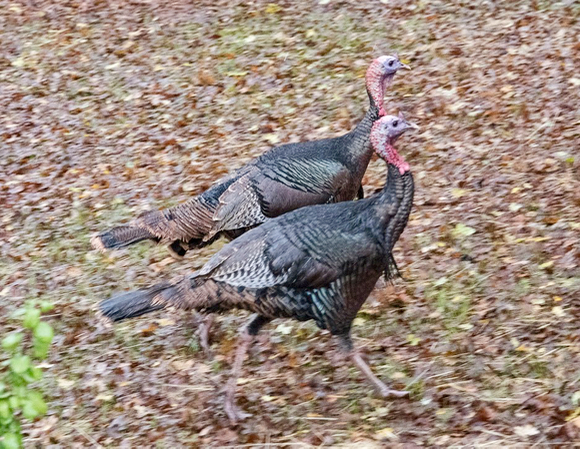 If Ben Franklin had his way, the turkey would have been our national bird instead of the bald eagle. That’s always surprising to me given the barnyard turkey is a fairly ridiculous looking, inelegant creature – at least in my opinion.

That said, Franklin’s reasoning makes sense when you consider the wild turkey. Their successful introduction to California is a great testament to this keen and impressive bird.

The Bay Area wild turkeys we have in our open spaces aren’t native to California. They’re a subspecies from the southwest brought to the state by the California Fish and Game Commission as a trophy hunting bird in the second half of the last century.

The wild birds adjusted easily to life in California, and over the years their population grew quickly. Today, wild turkeys can be found in a quarter of the state – still opportunistically enjoying the good life in California.

Part of the reason for their success is their curious appetite. As omnivores, they have options when it comes to finding their next meal. Seeds, berries, roots, insects, even small reptiles and amphibians are all fair game.

Unlike their domesticated cousins, wild turkeys are capable flyers. You’ll often see them cruising low through the forest canopy or up to a comfy perch to settle in for a night’s snooze. There’s still no comparison to the gracefulness of the bald eagle, but, again, Franklin’s reasoning makes a bit more sense.

They’re a courageous bird, too. In the spring, during mating season, it’s not uncommon for males to become aggressive towards people and charge valiantly toward a group of passing hikers. Terrifying though it may be, their courage is unquestionable and you have to give a nod to Franklin for recognizing that.

If he were alive now, I wonder what Franklin would think about the wild turkeys in California today?

There’s still considerable debate around the impact these birds are having on the state’s ecosystem. Studies have shown that these non-native wild turkeys are eating endangered species and threatening ecosystem balance, while others have found little evidence of negative effects. As their population expands, it will be important for us to better understand their impacts on the land.

Stay tuned and in the meantime, enjoy your turkey – native or not.

This article was written by Matt Dolkas for the POST blog in November, 2016. Photo of wild turkey in Portola Valley by Robb Most (c) 2017.