Today kicks off “January is for the birds” in Menlo Park 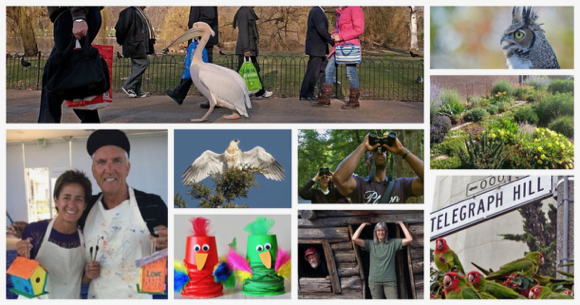 Anyone who’s ever thought to themselves that the month of January is for the birds is right; at least that’s the case at the Menlo Park Library. Over the course of the month, the library will be offering an avian-themed slate of films, science talks, crafts and special guest appearances.

Judy Irving and Mark Bittner, the director and human star of the documentary “The Wild Parrots of Telegraph Hill,” will talk about their work on January 5. Their film will be screened at 6:30 pm at a separate event (January 2), as will Irving’s follow-up bird documentary, “Pelican Dreams (January 8).” A third film, “Birders: The Central Park Effect,” will screen on January 24th.

A pair of scientists will also be giving talks during the month. On January 9, biologist Maria Viteri of Stanford’s Hadly Lab will give a talk entitled “Birds, Bats, and Pterosaurs: the Independent Evolutions of Powered Flight,” looking at how those vertebrates got off the ground.

On January 13, Yiwei Wang, Ph.D., Executive Director of the San Francisco Bay Bird Observatory will be talking about that organization’s avian research.

Other adult programs during the month include a paint-your-own-birdhouse session, a talk on attracting birds to your garden, and a presentation on raptors from a wildlife photographer.

Children can attend a bird-themed mini science fair, or sign up for various special craft and science activities.

The full “January is for the Birds” list  with times and locations  is available online.