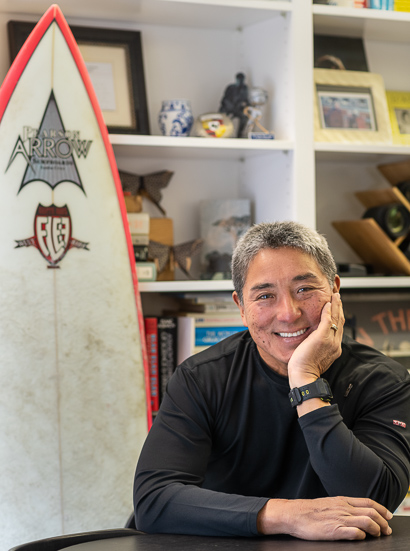 What’s more improbable: Growing up on Oahu and never surfing or taking the sport up for the first time when you’re 62? Well-known Silicon Valley marketeer  Guy Kawasaki lays claim to both.

Then there’s the fact that the respected author of  15 books got a C+ in ninth grade English (although he did progress enough to take AP English later on in high school with a teacher he describes as “the toughest teacher I had at any level of education.”

His latest book is Wise Guy, neither memoir nor autobiography, but rather a series of stories that demonstrate lessons learned. Guy will be at Kepler’s on Monday, March 4, at 7:30 pm to talk about it.

“Writing,” he says, “is the only mechanism where I can actually create rather than market.”

One crucial turning point for Guy was leaving Hawaii to come to Stanford, which he describes as among the best years of his life. “There weren’t a lot of career paths in Hawaii — retail, hospitality, agriculture,” he says. “I came to Palo Alto and the world opened up, although I did choose the easiest major — psych.”

He went on to get an MBA at UCLA.  “Back in the ’70s, that was a necessary degree to advance,” he says, “but I don’t believe it’s necessary to have an MBA to succeed in tech today. Of course, it’s easy to look back and say that now.”

What prompted him to write Wise Guy was to record the wisdom he learned over the years. “If you do a book like this too early, you don’t have enough experience, but if you wait to long, there’s a chance that you’ll forget,” says  the 64-year-old.

“The book is not about business. Maybe 20% is related to business, but the other 80% is about how to do life.”

Guy began surfing two years ago after his daughter had taken up the sport. He gave up playing another sport — hockey — that he’d enjoyed over the years. He now goes to Santa Cruz frequently and surfs the east side. [Note to non-surfers, the west side, which has Cowell Beach, is where people learn the sport; tougher surf is found on the east side at places like Pleasure Point and The Hook.]

Asked if he’s thought of trying his hand at Mavericks, Guy’s answer was an emphatic “No way!”