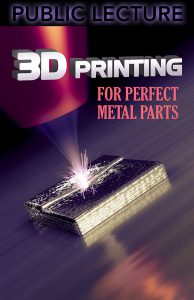 Throughout human history, improvements in the structure of metals have been essential to the sharpness of swords and the strength of steel girders. Now we’d like to produce turbine blades and propellers with optimal shapes and long useable lifetimes through 3-D printing.

This is a fundamentally new way of manufacturing things, building them up layer by layer rather than by carving or molding materials. Also known as “additive manufacturing,” this method will allow us to create exceptionally complex metal parts on demand, make faster, lighter vehicles, prototype new technologies and even build habitats on distant planets. But to make it work, the structure of the printed metal has to be reliably strong and uniform at the microscopic and even the atomic scale.

Achieving this high level of precision and control will require a solid understanding of exactly what is happening to the microstructure of a printed part as it is being created. At SLAC, we have developed tools for looking beneath the surface of metal additive manufacturing, understanding the physics involved and controlling this physics to create the metal components of the future.

Christopher Tassone has been fascinated by the structure of things since he received his first microscope at the age of six. He continued to delve into what things are made of and how to make them during his pursuit of a bachelor’s degree in chemistry at Santa Clara University. There he took his investigations down to the nanoscale, performing research at NASA Ames Research Center to develop nano-structured water sensors for missions to other planets. He received his PhD in physical chemistry from UCLA, where he developed methods to control the molecular structure of plastic semiconductors. He continues to build his toolkit as a staff scientist at SLAC National Accelerator Laboratory, where he uses X-ray beams to probe the atomic structure of materials as they are created.

Registration for this free event is not required; seating is on a first-come-first-served basis.