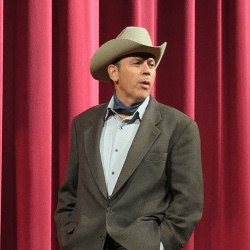 Meet the most-decorated U.S. soldier of World War II, Audie Murphy, who after returning home went on to a 21-year acting career, even while suffering from PTSD.

The performance will take place on Saturday, April 6, from 11:00 am to noon, at the Menlo Park City Council Chambers (701 Laurel St.)

This event is free, thanks to funding from the Friends of the Menlo Park Library.