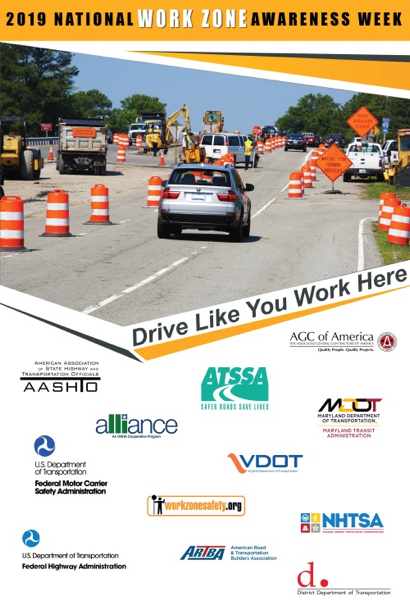 National Work Zone Awareness Week, an annual spring campaign held at the start of construction season to encourage safe driving through work zones on and next to public streets, is April 8-12, 2019.s  The Federal Highway Administration, the American Traffic Safety Services Association and state and local agencies have partnered to sponsor National Work Zone Awareness week since 2000.  The key message is that as a driver you must use extra caution in work zones to keep yourself, your family and others safe. This year’s theme is “Drive like you work here.”

The program reminds drivers of these safety tips for driving in work zones:

On Wednesday, April 10, 2019, Go Orange to show your support for work zone safety and to honor those roadway workers who have been injured or lost their lives to work zone crashes.

Subscribe to the City of Menlo Park’s Weekly Construction News Updates for up to date information about construction going on within the City.

From Menlo Updates: used with permission