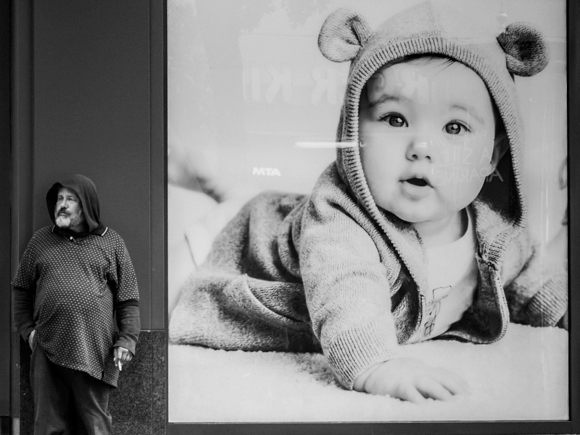 Menlo Park-based photographer Barry Fleisher is a participant in the Peninsula Photographic Arts Guild group exhibit titled From Concept to Print that is taking place at the Coastal Arts League Gallery, 300 Main Street in Half Moon Bay. The opening reception is on Saturday, April 20, from 2:00-5:00 pm, and the show runs through May 5.

The photos are part of Barry’s on-going street photography project From the Streets of San Francisco. They show something of the lives of the people who are out and about in the city — juxtaposed against eye-catching backdrops.

“I’m still doing construction photography,” he said. “Now that Packard Children’s is finished, [I’m photographing] a job site at the UCSF Mission Bay Campus, and I’m still photographing workers at the cable car restoration shop in San Francisco as well as fishermen at Pillar Point Harbor. But I’ve also been interested in street photography for some time.” 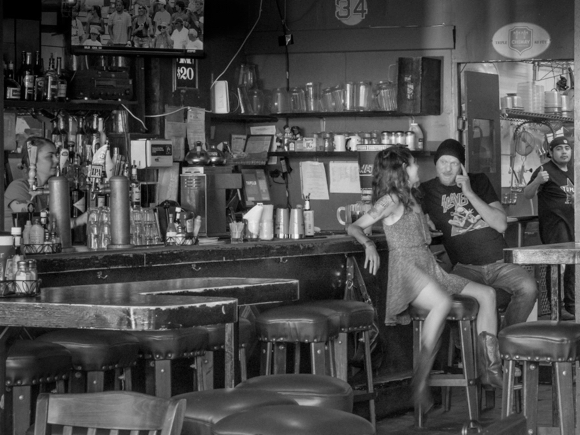 Two of Barry’s street photographs shown here will be in the Coastal Arts League exhibition: the man in front of the baby poster and the couple in the bar.

“I certainly have been drawn to the juxtaposition or duality of people against the backdrop of store window dressings — and sometimes find humor in that — and also of people interacting with each other  in different settings and ways. For the most part, I try to avoid interactions of people and their hand held devices, which is sometimes difficult to do these days!”

The photos shown here were taken over a five-year span with a Panasonic Micro 4/3tf – Lumix with GH5 model. “It’s not a full-frame camera but has other advantageous that I like,” said Barry. 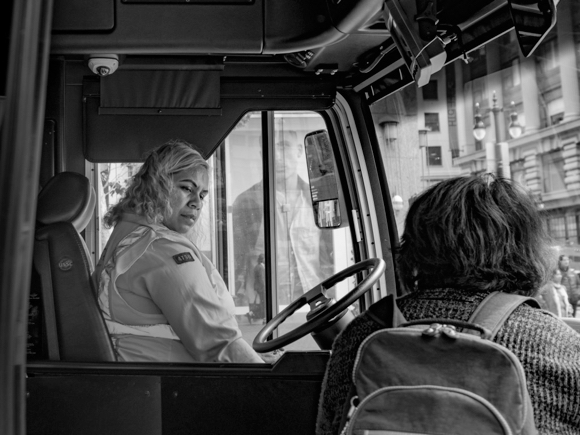 Man and baby: “One of my favorites places [for street photography] is where Powell hits Market. The Gap store there has terrific window dressings, I was struck by the contrast of the sad sack guy and the happy, chubby baby.”

Man and woman in bar: In addition to walking around the streets, there’s a neighborhood bar in North Beach that I look in on.If there are people who look interesting, I’ll talk to them. This couple appears to be enjoying each other’s company at 2:30 in the afternoon. There’s also the guy giving me the thumbs up.”

Bus driver: “She knew I was taking her picture. I think the look is more disdainful than I remember her being.  She was was just being watchful as a passenger getting on. Poster of man across the street adds a dimension.” 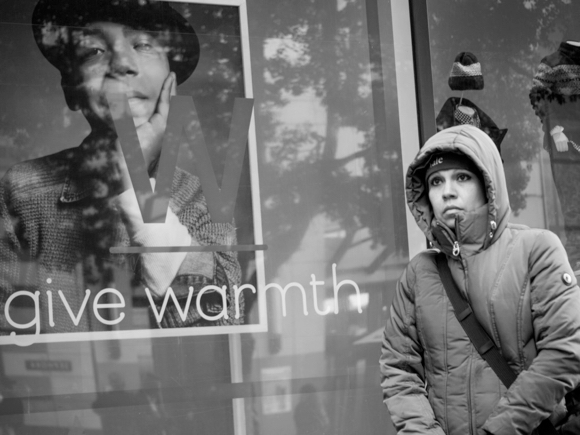 Give warmth: “This another poster in The Gap store window. It was chilly day. She was bundled up and looked like she could use a little warmth.”

Asked to sum up his interest in street photography, Barry replied. “Part of the enjoyment is that I get to know people and give them photos. I’m mostly interested in the people and their expressions and the light. That’s why the photos are in black and white. I don’t want to detract from that by adding color.”