Then and now photos as Ladera Recreation District pools turn 60 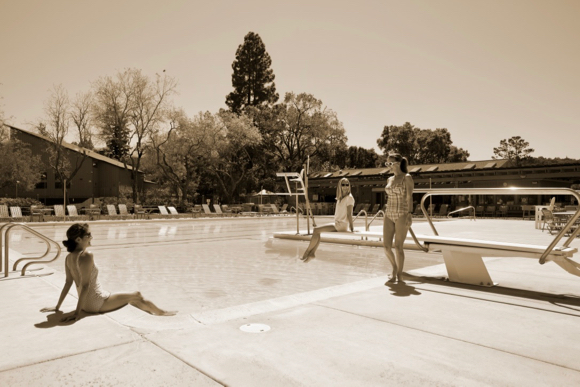 The Ladera Recreation District’s two pools debuted on April 29, 1959 — 60 years ago today. “Ready for inspection will be two heated pools and bath houses with showers and dressing rooms,” read a newspaper account of the opening.

The pools were financed by a $85,000 bond issue which had been approved by Ladera residents the prior June. Robert Hind, who was president of the District board of directors at the time, noted that the cost would have been much greater if it were not for the volunteer labor of Ladera residents who worked on fencing, landscaping, and painting.

Following passage of the bond issue, District directors negotiated with Stanford University for the property and were granted a lease on land adjacent to what was then Ladera School.

To commemorate the pool opening, Ladera residents re-staged a Palo Alto Times photo taken in 1959 (below). We’re showing the “today” photo in sepia to align it with the newspaper clipping from which the old photo was taken.

Membership at LRD is open to both Ladera residents and those in neighboring communities. More information is available online.