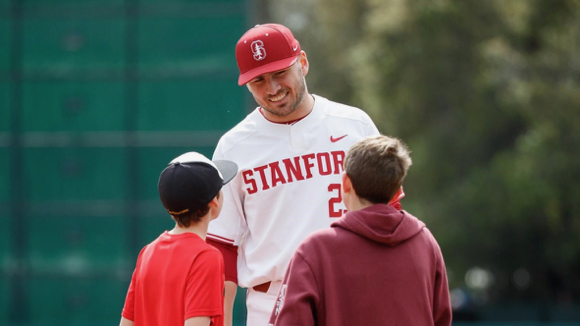 Thanks to stellar performances over a week’s span Stanford first baseman Andrew Daschbach was the recipient of numerous accolades, including Pac-12 Player of the Week. He also was given performance of the week awards from PBR Tournaments and the Golden Spikes.

Daschbach, who grew up in  Atherton and attended Sacred Heart Prep, went 4-for-4 with four home runs and five RBI in a 7-1 win over Cal Poly (May 14), also going 3-for-5 with a pair of triples and two runs scored in Stanford’s 8-5 win over Oregon State (May 17). Daschbach finished three games last week with 23 total bases, six RBI and six runs.

Daschbach, a junior this year, is the first player in the NCAA to hit four home runs in a game this season and the eighth to do so since 2013. He is the second-ever Pac-12 player to hit four homers in a game, joining UCLA’s Bill Scott (vs. Washington on March 30, 1999).

Daschbach’s 16 total bases against Cal Poly are the most of any player in the NCAA this season and the most in the Pac-12 by five.  His four homers tie for the third-most in a single game in NCAA history – Marshall McDougall hit six for Florida State on May 9, 1999, and Henry Rochelle hit five for Campbell on March 30, 1985.