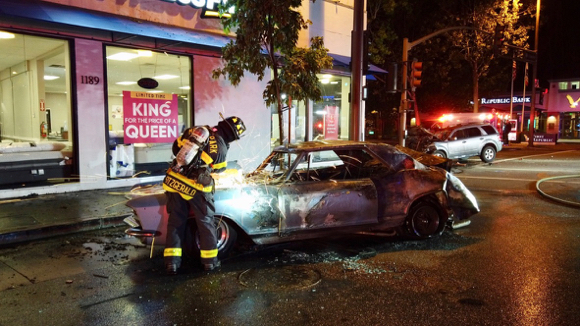 On Sunday, May 26, 2019, at approximately 12:29 a.m., a collision between two vehicles occurred at the intersection of southbound El Camino Real and Oak Grove Avenue. One of the involved vehicles caught fire and all four occupants were able to escape with non-life threatening injuries. Three of the four subjects were transported to a local hospital for further treatment.

Menlo Fire responded, extinguishing the vehicle fire. Captain Johnson commented “that it looked like a scene in the movie “Back to Future” with ribbons of fire in the street trailing behind the vehicle”.

The other vehicle crashed into a traffic signal pole. The driver and sole occupant of that vehicle, Luke Quinton, a 25-year-old male from Menlo Park, was transported to a local hospital with major, non-life threatening injuries.

Based upon evidence at the scene, statements by involved parties, and observations of Menlo Park Police Officers investigating the collision, Quinton was arrested for 23153 VC – felony DUI causing bodily injury.

Quinton was subsequently released from the custody of the Menlo Park Police Department while he sought medical treatment for injuries sustained during the collision.