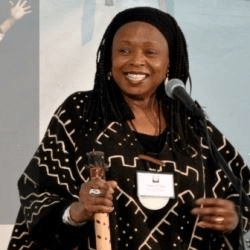 On June 19, 1865 — years after the signing of the Emancipation Proclamation — word finally reached Texas that African-American enslavement was now against the law.

In a program for adults, teens, and mature tweens, Diane Ferlatte will share captivating, moving tales to mark that day at the Menlo Park Library on June 19 from 7:00 to 8:00 pm..

Diane will honor Juneteenth, telling stories of African Americans’ contributions, experiences, and struggles in America from 1776 to June 19th, 1865.

Diane may also share stories of her personal journey across the cultural & racial landscape of America as she is accompanied on banjo and guitar by her musician, Erik Pearson.