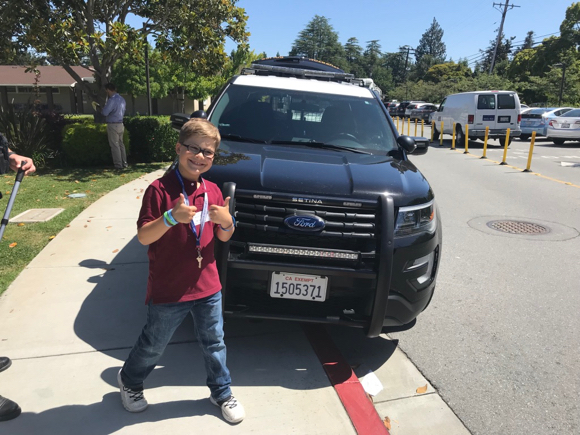 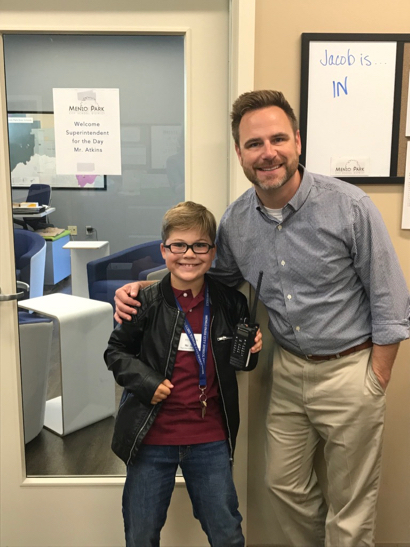 The students shadowed MPCSD Superintendent Erik Burmeister, who planned activities of interest to the young superintendents. The students conducted radio drills, toured other campuses and visited classrooms, signed important papers, and met district staff and learned what their roles are. They even met with Laurel and Hillview “Principals of the Day” who were scheduled for the same day.

Jacob enjoyed the opportunity to visit other schools. He said coming to Encinal was like “being in Texas! It’s so big compared to Laurel’s Upper Campus.” He is in Spanish Immersion and loves being bilingual, a skill he feels will help him get a good job someday. He looks forward to having a “really fun teacher” next year in fourth grade.

As part of his day, Jacob met with the Atherton Police Department School Resource Officer (SRO) KC MacDonald who gave him a tour of his police vehicle, let him try on his 45-pound vest, and explained what the police do to help schools. He also took a tour of the Menlo Park Fire Station, learning the difference between an engine (holds water and hoses) and a truck (carries ladders and tools), and even got to ride in a fire engine.

When he’s not running a school district, Jacob enjoys basketball, baseball and video games. He loves his new puppies, 12-week-old Cocker Spaniel sisters Roxy and Rosie, who he says “are the cutest things in the world.” He looks forward to sleepaway camp this summer where he will share a bunk with all his friends. 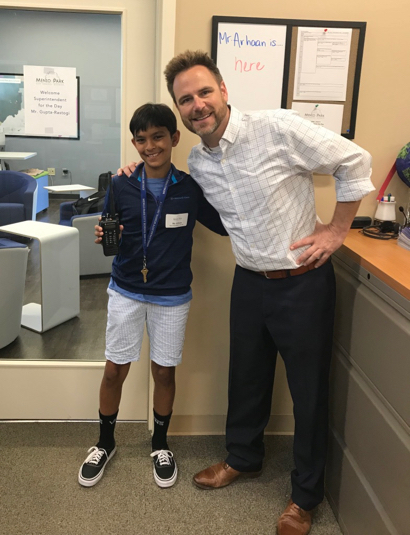 Arhann (pictured above with Mayor Ray Mueller and right with Erik) found his position of Superintendent for the Day to be something special as he was able to “see how the job is done from behind the scenes.” His favorite part of this experience was reading the announcements on Hillview’s HVTV, a duty usually reserved for eighth graders. As he spent the day with Mr. Burmeister, he was able to learn the ins and outs of a very busy job that requires a lot of hard work and dedication.

An exciting part of his day was meeting with Menlo Park Mayor Ray Mueller to learn about the city and the Mayor himself. When asked if he had any potential ideas to improve Menlo Park, he cited improving public safety by adding traffic guards to busy intersections in downtown Menlo Park and increasing community inclusion by encouraging downtown shop employees to engage in friendly communication with students, a concept that was complimented by Mayor Mueller.

Arhann is extremely interested in studying environmental law and policy, citing climate change as an issue he is particularly passionate about. Looking towards the future, he dreams of a political career possibly as a political analyst for a major media outlet. He explains that much of his love for politics comes from watching the news every morning while he eats breakfast.

When he is not focusing on his academics — or acting as superintendent — he is playing the violin, battling his friends in video games such as NBA 2K, and on the field with his soccer team the Alpine Strikers. He looks forward to seeing his friends this summer and travelling abroad with his family.