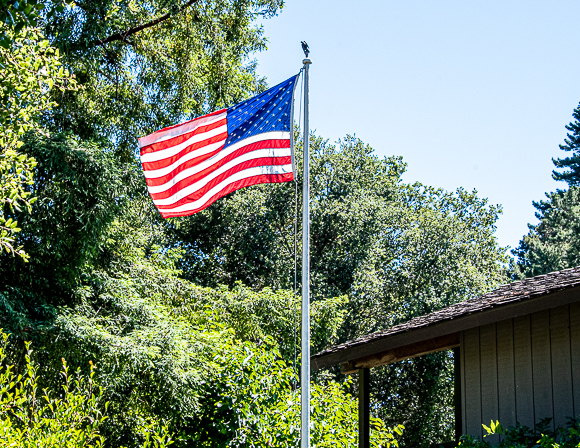 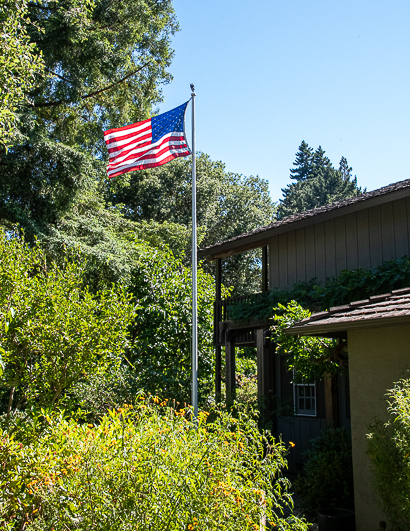 “I grew up on San Mateo Drive and went to Oak Knoll with the Notthoff kids,” said Bill. “Their house was on Bay Laurel where Hermosa comes in. The first thing you noticed when coming from Hermosa was the flag pole in their front yard.”

Some years back, Bill bought his current house on Bay Laurel from his aunt. That put him kitty-corner from the flagpole. Her learned a bit of the flagpole’s history from one of the Notthoffs.

“The flagpole was there when we moved into the house in 1964,” Annie Notthoff emailed Bill. “We bought it from the Martins who Mom already knew. They were the only other family that owned the house other than the architect who built it. He also built several of the nearby houses.

“Dad always liked the flagpole. He maintained it as needed. At Christmas he would hoist up colored lights to make a big triangle tree, and at times he’d display maritime pennants, one of the many things he collected.”

The “Notthoff’ house” was sold a year ago. “It soon became clear that the buyer was going to tear it down and build a new house,” said Bill. “I reached out to them and got such a nice email back, confirming they were building a new house, and they’d love it if I took the flagpole.”

The next task was to dissemble it from one location and move it across the street to its new location. “It had brackets on each side and bolts to brace it,” he said. “It’s a fairly tall pole. and we unbolted it and brought to its new home, where we set it in concrete.”

And that’s why Old Glory is still happily waving in the breeze on Bay Laurel saluting walkers, cyclists and motorists who pass by.